So after all this time, Saturday’s was my first excursion to the Floyd Bennett Field, at the very eastern tip of Brooklyn. Built in the early 30’s, the field was New York’s first municipal airport and was meant by the city mayor to lure the US Postal Service and major airlines away from their Newark base. But only American Airlines took the bate and despite the regular visit of many great record-setting aviators such as Amelia Earhart, Howard Hughes and John Glenn, the field was rather isolated and never joined the major leagues. It was used mostly for military operations until 1972 when it was decommissioned and included in the Gateway National Recreation Area, managed by the National Park Service. 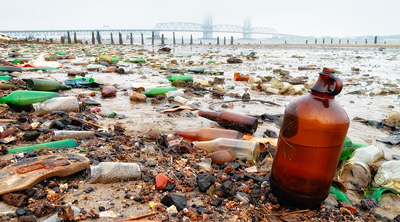 The Legacy of Dead Horse Bay

That goes back to the late 19th century when infamous horse-rendering plants surrounded the bay. Later on, early in the 20th century, the area became a landfill that was then capped, only to burst open in the 50’s. Old garbage has been leaking onto the beach ever since. One thing is for sure, it’s all glass and rusted metal, no plastic. How our consuming habits have changed…

On Saturday, the beach was not only littered with interesting artifacts resurfacing from almost a hundred years of absence but also dead horseshoe crabs, and their surfacing dates back 450 million years! They are considered living fossils and come to the beach to mate, not always very successfully as the carcasses remind us. Ironic that horseshoe crabs should come and strand themselves on a Dead Horse Bay beach.

This time around I was pressed for time, darkness was coming and along with it, rain. We will be going back there soon to conduct a proper beachcombing session. Stay tuned for more. 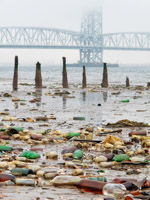 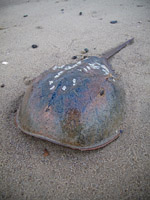