On a Piper Navajo back in the Little Cayman days
Airborne, Cayman Islands, Hydrosphere, Photoblogs

Crossing the Burrard Inlet recently on the SeaBus and watching the floatplanes engaged in their endless aerial ballet, my thoughts drifted back 5 or 6 years ago when I used to fly with Danny H. across the Gulf of Mexico.

Danny owned a Piper Navajo twin-engine airplane. He had a big family and even though he was fully qualified to fly the Navajo himself, he liked

having a safety pilot come along when he flew with them, just in case. My past flying experience had resurfaced, I’d renewed my multi-IFR commercial in Canada, obtained an FAA PPR and once in a while, I would fly with them one way and ride commercial the other way. Danny could afford that.

Departing from Little Cayman involved filing an international flight plan with Cayman Brac and including the sacred Cuban over-flight permit number without which no plane is allowed into Cuban airspace.

After a thorough pre-flight inspection, the “walk around”, and a struggle to fit the massive amount of the family’s accompanying luggage into the wings, forward and aft compartment came the riskier part of the flight: the LC take-off run on the short grass and gravel airstrip with a fully loaded plane which, thank god, had half-empty fuel tanks that we would fill up in Cayman Brac.

Danny is an excellent pilot. His soft and short field take-off and landing skills are sharpened by the frequent use of the LC runway and that of his home field in Bellechasse, LA, FAA codename 65LA …

We’d then hop across the channel at 1000 ft. to the Brac, clear customs and take off again for Key West. Going back to the Sates usually meant strong headwinds and the flight was long and slow. Above 10,000 feet, the air is thin and after two hours of wearing the noise-suppressing headset, I often ended up with a good headache.

The kids would play games in the back and sleep, while we talked with Cuban ATC and listened to the chatter of airliners cruising high above us through the Cuban corridors. Havana Center would pick us up somewhere between the Brac and Cayo Largo and only release us to hand us over to the Miami Center, who in turn would hand us over to Key West Approach.

Cayo Largo would fly by with its immense beaches and shallow waters as we turned towards the north and made our position report. 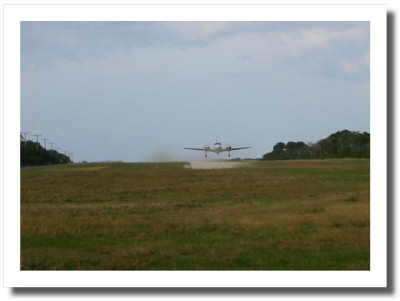 Then, around 50 nautical miles from our destination, it was the long descent at cruising speed, preparing the plane for landing, arranging the cabin, beginning the checklists, reviewing IFR approach plates even though the weather normally permitted visual approaches.

And then we’d be in Key West. Not much time to waste there as the longest part of the journey remained. Clearing US customs in Key West is quick and pleasant, nothing to do with the Miami Int’l nightmare.

The weather north of Key West would usually deteriorate as big thunderheads drifted in from the Gulf. Our flight along the western coast of the panhandle would force us to dodge off-course right and left, until we finally turned due west towards New Orleans.

Sooner of later, exhausted by the flight, rocked by light to moderate turbulence and dazed by the relative lack of oxygen, everybody in the aft cabin would drift to sleep again, eventually imitated by Danny. I’d be left on my own, alone with my thoughts, nervously glancing at the weather radar and trying to anticipate breaks in the clouds and closing gaps. Endlessly scanning the instruments, adjusting engine revolutions so that they wouldn’t pulsate but hum

evenly, requesting deviations off-course to the ATC, preparing the next leg of the flight, I would often think of Saint Exupéry and his real loneliness in the sky, back when flying was still an adventure. I would ponder how he met his end and force myself to concentrate even harder on tracking that VOR radial.

The last leg would generally involve a glorious sunset, cities lighting up below our right wing and then dead ahead, the lights of Louisiana would appear, like shimmering stars in a winter sky. Danny would always wake-up on time for the approach, of course, as if alerted by some sixth sense. I was always amazed at how he seemed to navigate his way right to the Southern Seaplanes minuscule base through the New Orleans suburbia.

Finally, having given me the controls soon after take-off, he would regain command of the plane and with a hand that was much more assertive than mine, he would slow us down and set us up for a short landing, full flaps and a low approach at high power. Everybody was tired at that point, us included. But I would get off the plane feeling like I had just been to another world.

Thank you Danny for trusting me. To this moment, it means the world to me. Those were magical days.

3 first photos courtesy of Nance.
The 4th photo is an aerial view of the West End of Little Cayman.
In the circle was home.