Noise and the city

A cruise ship passes by headed for the First Narrows and Lions Gate Bridge while another blows its horn before departure at Canada Place. Seaplanes are buzzing around like bees and docking one after another in a roar of turbines. Kids scream playfully as they run through the fountains. Jazz music pours out in waves from somewhere nearby. A few words arrive carried by the wind from the loudspeakers onboard a touring paddlewheel boat. A gorgeous blond girl at the next table is laughing out loud and gives me a smile. They are drinking martinis and beer and have a loud toast to the arrival of summer. Sound is everywhere, pulsating, reverberating off the façade of glass buildings. It isn’t aggressive, though; it’s just alive, in the city’s image. As Tom would put it, this is a perfect QVM*. 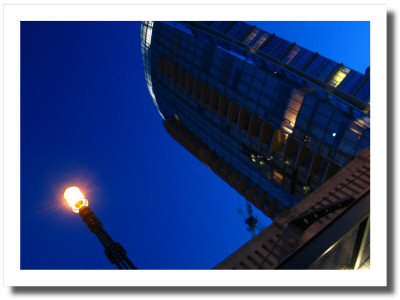 Note: for the purists, the passing ship is the Diamond Princess, of Princess Cruises. Along with her sister ship, the 116,000 tons Sapphire Princess, she is the largest cruise ship to ever come to Vancouver. She is 951 ft. in length and will carry up to 2646 passengers and 1100 crew at 22 knots to Alaska all summer.

The float planes are mostly DeHavilland Twin Otters, Otters and Beavers as well as Cessna Caravans. The DeHavilland are Canadian-built aircrafts and constitute the bulk of the world’s bush flying fleet. Pratt & Whitney PT6 turboprop engines make even the single-engine Otters and Caravans quite reliable and their only rival is the expensive Swiss-made Pilatus PC-12. They fly continuously to Victoria and the Vancouver Island, and many other Lower Mainland destinations.