When one has been bitterly disappointed by the new chic movie of the year, there’s nothing like a long run to put things back in perspective. That’s what I did Tuesday, abandoning my routine Home –  Brooklyn Bridge – Hudson River – Battery Park – East River – Brooklyn Bridge – back home run 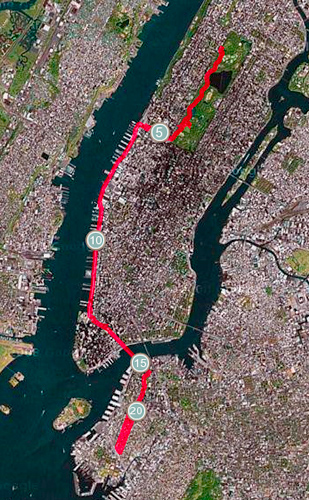 and setting out on a Manhattan experiment.

From Brooklyn, I hopped on the subway in my running gear and rode the C line all the way to 110th Street at the northwestern corner of Central Park. When I came up to the surface, the weather was still rather sunny and temperatures hovered around freezing, with a chill factor of about -5°C. It was going to be perfect running weather.

I warmed up for a while and then broke into a leisurely run, heading down Central Park’s West Dr., pacing myself as I had a long way to go. The place was rather quiet and I didn’t notice as many egos on fluo running shoes as I had before. A few dogs were walking their owners, and vice-versa.

At the bottom of the park, I took a sharp right on 60th Street and aimed straight for the Hudson. I then settled in for the long haul and followed the river southwards, eventually cruising by the Intrepid Sea Air and Space Museum (see post to come, maybe, if I can finish it).

Surprisingly, that section of the Manhattan Waterfront Greenway made for one long stretch of very boring running. Despite a light westerly wind pushing exhausts away from me, cars were rushing by way too close, that straight line never seemed to end and the blinding late afternoon sun setting low behind New Jersey City made me squint hopelessly.

I ate my energy bar while running (gels, which I prefer, are damn hard to find around here), around the 10K mark, chewing carefully with my mouth wide open because my nose was stuffed up and O/S. I was le tired. Then there was something rather crippling about looking over my shoulder at the Empire State Building lurking up from behind lower buildings, and thinking that, having started at 110th Street, I had another 40 blocks to go before turning east back into Manhattan…

But the turn came at Chambers St. which lead me across the city, passed City Hall and onto the Brooklyn Bridge. I was back on my own turf. I crossed the bridge with relief and headed down to the ‘hood, only to realize as I reached home and checked my trusted Garmin Forerunner 305 that I had miscalculated the run’s total distance and was short about 4 km out of my 20K target.

Legs feeling like lead, I pushed on, following Clinton to the Gowanus Expressway and back on Henry, plus a small loop around the block. At 20km exactly and 1h55, I came to a grinding halt in front of the house. There would be none of the usual cool down jogging this time. I’d just had it. This was no Olympic record. The knees were protesting loudly. Achilles tendons were sore. In fact my entire body was sore. I just then remembered why I don’t do long runs. They are one of the best ways I know of clearing my mind and recharging the mental batteries, but they are boring and hurt too much.

Still. The run served its purpose. I’ll go see the bloody Avatar movie again. Everybody else has.