After commenting rather cynically in my last post about the reasons that make some people run, I thought it would only be fair to document the “other side”. So last Sunday I stood on a Fifth Avenue sidewalk for an hour and a half as marathoners flowed through kilometer 35, headed down towards Central Park and the finish line. Some seemed to be enjoying themselves, most looked in pain, a few struggled greatly.

It was tough weather for the New York City marathon 2014 edition, probably the coldest day of the season so far, and from just standing there, well dressed with a wool hat and gloves, I was thoroughly frozen when I got back home. I can only imagine how this would have complicated the choice of clothing. Some ran in shorts and t-shirts and when they stopped even briefly – and how would one not? – they must have chilled almost instantly.

A marathon is a colorful extravaganza. However with the exception of the opening picture below, I shot these images with black and white in mind as I wanted to focus specifically on expressions and avoid the distraction of fluo tights, flashy outfits and brand sponsorship. 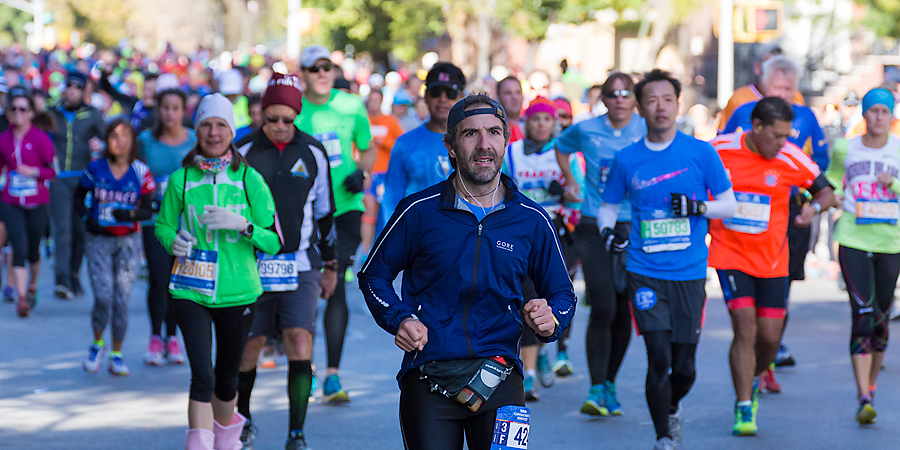 I am rarely very optimistic about our current potential as evolved beings. If aliens are watching us from outer space, monitoring our civilization – or the lack thereof – through an array of highly advanced harmony detectors, their screens must be getting a lot of ugly red blobs located over war zones, hunger areas, townships and dumps, epidemic outbreaks, earthquake epicenters, oil refineries and every major city on the planet.

Yet I believe that on the day of New York’s marathon, and all other such events worldwide, with so many people running alongside one another, suffering together a pain that doesn’t scar, an agony without consequences, giving the best of themselves, helping each other, and with so many supporters cheering, playing music, encouraging and standing in awe, present that day in utter selflessness, without anything to gain or lose, no greed nor calculation involved, I believe the city must suddenly glow bright blue on those space monitors, and the aliens might raise a mandible to scratch an angular jaw on their secondary or third head, telepathically pondering the puzzling fact that “Well, maybe that specie isn’t beyond salvage after all.”

To all the runners and especially the people on these pictures, whether you were running, walking, stretching, smiling, crying, in pain, focused, almost defeated, cramping, cheering others, cold, sweating, in your element or completely overwhelmed, and regardless of how you got there and whether you went any further, kudos for making it this far from Staten Island, on foot, on a cold autumn day.