The snow is fun for kids. So Estorbo and I, both qualifying as such, had a blast digging an igloo. Well, I dug and he watched, and then happily investigated in exchange for a few pellets.

I must, however, downgrade my earlier appreciation for the city’s recovery speed. More than thirty hours after the end of the storm, much remains to be done 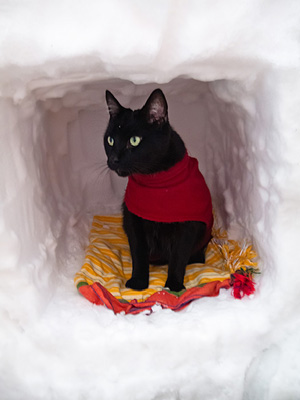 The subways have been packed all day, feeling the burden of an incredible number of New Yorkers unable to use their car to go to work.

As of late afternoon, most side streets in Brooklyn still haven’t been ploughed. It might be due to a lack of city infrastructure and/or preparation, or simply to the fact that ever since Sunday night, fools have been trying to drive their summer-tire-equipped cars through over a foot of fresh snow. Most got stuck and simply abandoned their vehicles where they were, right in the middle of the street, making it impossible for snowplows to come and do their work.

Surprisingly, sidewalks are mostly clean, much better than the streets, as New York owners and landlords are responsible for maintaining their section of sidewalk.

The city isn’t out of the woods yet, but its pulse is improving. 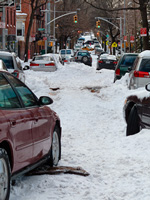 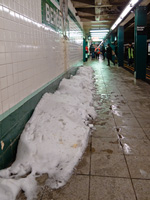