The rainbow that reached across a continent

Earlier this afternoon, I called Marie on Skype. She answered a little out of breath, and untangling her earphones she said in an excited voice: "I was on the terrace. There is a

beautiful rainbow!" Nice, I said, thinking that New York’s really got it all, mammatus clouds, rainbows and black cats.

Then later tonight, after the wind had picked up and blown hard bringing low grey clouds and rain, I caught a glimpse of orange light through my curtains and thought that maybe the sky was clearing a bit and allowing some sun to shine through 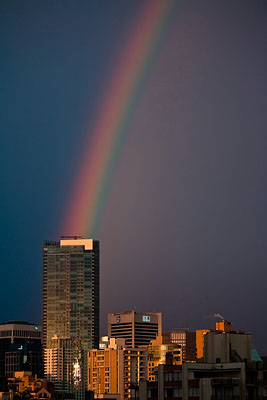 before it sank beyond the world.

I got out on the balcony and my jaw dropped. Unknown to me, a perfect rainbow had formed to the east and was hitting the Shangri-La – highest tower in Vancouver – dead on. I rushed back in, grabbed both cameras and in my underwear, stood on the balcony and shot as fast as I could.

The sky was turning purple and windows were shining brightly in the evening’s first and last rays of sunshine. The rainbow seemed to be launching from within the Shangri-La in downtown and reached all the way to the other side of False Creek. At some point it even doubled up. Behind me towards the west, clouds lingered on the slopes above Howe Sound, fire within and shadows all around.

Later, the light seeming to last, I jumped in a pair of shorts and a sweater and ran out, tripod in one hand, camera in the other, a spare lens in my pocket and shoe laces untied. On the beach, I ran into two friendly herons. But that will be another post. 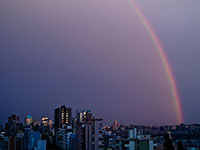