Last week-end, we visited Marie’s wonderful friends Ariana, Nancy and Dan on Fire Island, and I, for the first time since I’d left Little Cayman in 2005, revisited 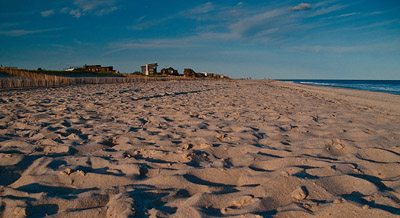 the Ghost of Islands Past. Or rather, it revisited me.

Now before y’all go on speculating, I must clarify that the above implied resemblance between the Cayman Islands and New York’s select getaway island isn’t that completely obvious. Besides some 21 degrees of latitude, they are separated by many racial, meteorological, geographical and cultural differences. But islands will be islands and a rock is a rock, no matter which ocean it floats in.

For one thing, only a boat can get you there, and as you leave the mainland behind and train your eyes offshore on a thin flat line that

will grow into a full-size landmass of its own – complete with trees, houses, strange people and cold beer – the swells slowly take control of your inner rhythms as diesel engines hypnotically mark the beat and seabird cries echo overhead in complaints of hunger and freedom.

For another, once you step foot on it, an island unavoidably casts a shroud over your heart and will never let go, as long as you live. Viscous, powerful, addictive and destructive at the same time, the island way of life digs itself a trench inside your heart and forever sleeps in, at times dormant maybe, but never extinct no matter

Stepping foot onto a rock, one mentally – and often physically – kicks off the shoes, puts sunglasses on, looks around at all the perfectly orchestrated laziness, the latent abandon and the chic laisser-aller, and instinctively, with a deep sigh within, crosses an invisible frontier and becomes part of the decor.

Islands are strange theaters. Their plays require everyone’s participation and make one an actor and spectator simultaneously. Alternating between unbridled comedy and heart-clenching sadness, they tell of the life of men and the moods of the sea. Living on an island is gathering the most incredible stories, like one collects photographs and grows fond of the memories they freeze in time. The stories get passed

on from one short generation to the next and acquire a life of their own. But often, the reality of island life is such that the most far-fetched fiction couldn’t even compete.

An island is an exceptionally compact community where privacy is an impossible luxury. Islanders don’t really seem to mind and watch rumors and facts travel around at the speed of sound. There isn’t much to do on a rock and the locals, like Hobbits, revel in keeping track of their intricate relationships with the community – as many complicated theoretical genealogical trees as there are souls, very few actually involving family but still wonderfully full of gossip and conflict and colorful characters.

And then there’s the ever-present sun, the salt, the 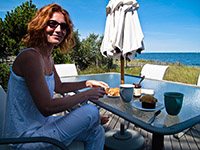 sound of waves, the white beaches, the many boats, and the bars. The many bars. The too many bars…

Having pondered all this and shed a melodramatic tear about my own extensive island history, I set out for a run on Saturday afternoon. As our morning walk northeast to the Sunken Forest had lead to a  dead end on the cement path and forced us to follow the beach for quite a while, I left in the opposite direction, hoping to find a route long enough for my usual 10k. The heat had dropped slightly after the emergence of a high altitude cloud layer and a nice breeze was blowing from the south. I switched the Forerunner on and let it acquire enough satellites to position us while walking fast towards the Seaview ferry landing. The great little tool almost blew a chip when it

realized how naturally open the sky was out here, being so used to a partial line of sight through high Brooklyn and Manhattan buildings.

A bit beyond the local market, I launched into an easy jog. So far, the heat has prevented me from even thinking of going back to HIIT and my runs are a touch slow, but I focus on finishing them, which is an honorable goal if I ever knew one. I followed the paved pedestrian paths down through the small town, laughing

inwardly at the ground painted 4-way bicycle stop signs that marked each intersection. One thing was for sure, I wouldn’t be at risk of getting run over by a car, since none are allowed on Fire Island.

Soon, though, I smelled trouble. The cement path lead right and left to the nearby water (the island at that point is only about a half-kilometer wide) but the only way forward was a deep sand trail. I decided to run on it for a while, hoping it would turn back into a hard surface. Running on deep sand isn’t fun at all. 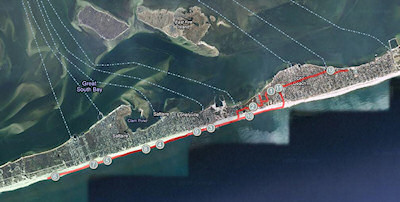 The stuff gets in your shoes and turns your stride into a wobbly caricature. It soon became apparent that loose sand was all I’d find onward. That didn’t make me happy and I couldn’t imagine finishing 8 km in these conditions so I chose the only option left and headed for the southern beachfront.

I’ve never run on a beach before, despite the cliché and obvious beauty it involves. I thought it would for sure fill my shoes with hostile

abrasive matter and the salt might even damage them, and I assumed such softness would make one’s heels sink out of control on every stride. So I was rather cautious when I reached the shoreline. The tide was going up and the ocean had begun gaining on the emptying beach, prompting me to slalom along the wet edge in an attempt to remain on hard sand.

The week-end had been extremely calm and gentle waves were lazily lapping the beach towards me, forcing me to jump out of the way once in a

while. A poor puffer fish lay on the sand, having possibly spent its last energy in a deadly display of courage, inflating until death followed. But the running was going much better than expected and I began to relax.

I eventually set my sights on the Fire Island Lighthouse as a turnaround point. At 6 km and bits, I was a stone’s throw away from the beautiful black and white lighthouse but decided to go back because I was getting le tired of running on semi-wet

sand and the tide was threatening to close my narrow band of relatively flat and hard surface.

I hit the house at 12 km sharp. My left Achilles tendon was sore but otherwise, I was in good shape. Marie greeted me at the door with a smile. A beautiful night was upon us. Our charming hosts’ typical island hospitality was warm and perfectly simple. There was delicious duck on the braai. It was going to light a fire worth the island’s name. But that’s another story. 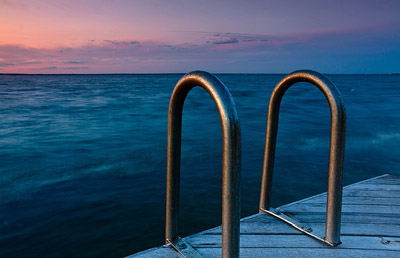