Ten Bridges – A Long Run Around Manhattan – Part I

A few weeks ago, I did a 30K run down the entire length of Manhattan, almost a duplicate of a run I had done last year. It went decently well, if one gauges success by the lack of absolute misery and a fairly quick recovery.

So this Saturday, after months of risk versus benefit analysis, I decided to raise the stakes and go for a really long run. Now me, I don’t like crowds, so the idea of rushing off an organized event’s start line along with 20,000 other friendly runners just doesn’t appeal. However I admit that official races have two great advantages: they feature a solid infrastructure (we’re talking hydration stations, first aid, signage, toilets, a car-free route and much more) and intense crowd cheering, which I have found – against all odds – to be quite an amazing boost that in turn pinches pride, ego and anger when they need it most.

But my plan was for a solo run. No cheering, some honking, unavoidable traffic. Bathrooms, random at best. Hydration would have to be purchased along the way, energy being carried in. I would lug one bottle at a time in a belt, enough gels for the whole run, money, ID, a subway card, and my cell phone.

I did not sleep so well the night before, nor so badly. I had planned my run down to the last sidewalk but decided to leave the final go/no-go decision to last minute, based on weather, shape, mental and gut status. By noon Saturday, however, everything was peachy and I gave myself a green light. I dressed up – or rather down – buckled my belt, said my goodbyes and don’t worries, and headed for the subway.

My plan was simple. F train from Brooklyn to the Delancey St station on the Lower East Side. Walk briskly back to the East River some 5 minutes to warm up. Cross the FDR Highway, get on the bike path, start the GPS and run, baby run. Up the East River pretty much to the top of Manhattan, then across the island, down the Hudson all the way back to Battery Park, and catch a subway home. 26 miles, 42 km. A marathon. My first.

I’d given myself two goals: one, finish. Two, finish. Having not trained specifically for such a long run, I had also calculated multiple exit vectors should the warrior’s muscles not follow his mind. My route had a few strengths, and as many weaknesses. Water and Gatorade would be easy to buy along the way, and facilities were rather evenly spaced out, in case of strategic need. Most of the run would be pleasantly free of cars and on a waterfront path. But there would be a few incursions into the city-proper and I knew from experience that these are always very energy-costly to me. 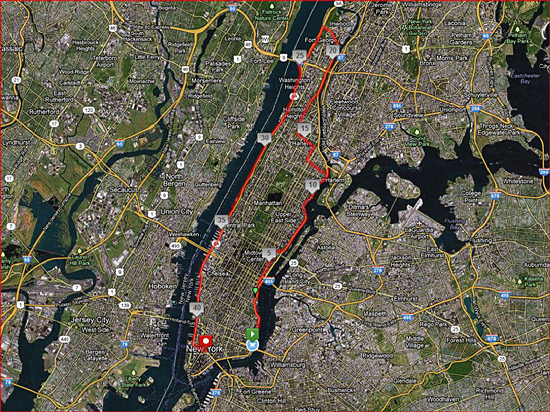 I started very slowly, with the serious intent of keeping it slow all the way. I had opted for a run/walk strategy that is said to be an idiot’s best approach to marathons. The entire course was plotted on my Forerunner 310XT which would vibrate every time a pace change was needed.

I began the run just above the Williamsburg Bridge in the Lower East Side. I had previously run up to that point from the bottom of Manhattan on my way back to Brooklyn but never past it, so the first part of the run was in pleasantly virgin territory. The East River path was nice and the weather gorgeous if maybe a touch hotter than I had hoped for. There were runners everywhere. It takes great zen and self-control to be passed by comets in fluo tights who are running at warp speed – albeit probably around the block. But I stayed focused. Stick to the plan, stick to the hydration and carb intake rhythm.

Around 33rd Street in Midtown, I had to leave my riverside a first time to dodge the massive United Nations. It is well known that world politics often interfere with people’s freedom rather than help it. I had anticipated it however and I ran on sidewalks a few blocks from the river, passing hordes of Asian tourists, pondering the fact that Chief Inspector Dreyfus’ laser did not after all erase the landmark, until somewhere around 67th St I dropped back down to the river and the path resumed. From there, it was smooth sailing, under the Queensboro Bridge and passed Roosevelt Island, further and further north into the Upper East Side.

There was a strong bend in the river, the Ward’s Island Bridge to Randalls Island appeared on the right, projects stood on the left, and I was in East Harlem. At 110th St, I knew I had topped the full height of Central Park. Ten blocks later, I climbed over the FDR highway again and headed into Harlem, the East River path vanishing suddenly to turn into a no-man’s shore.

I ran two thirds of Manhattan’s width west and north to St Nicholas Park digging deeper into Harlem. That part wasn’t fun. Traffic lights, uneven surfaces, busy sidewalks, hilly streets, no way to keep an even tempo. Eventually though, I reached the ramp down to the Harlem River Drive and my commute was temporarily over. I was now in known territory. I joined the river path once again and focused on re-establishing a routine. I was for all practical purposes alone.

Each one-minute walk would be used for a specific purpose, in succession: drink, drink and gel, stretch. This meant a gel every 30 minutes or so. The stretching was recommended by ultra-marathon runners and even though it might not have been necessary on such a such a short run, it seemed to make a nice difference. I have very bad knees and am forced to wear braces. My stride probably isn’t as relaxed as it could be for that reason. Stretching my quads and calves along the way singularly helps with the prevention of hip stress and lower-leg cramps and soreness.

I followed the Drive to Dickman Street where I cut in towards the Hudson. This would be my last street running for the day and having already done that section, I knew exactly what to expect. That can be so helpful, psychologically.

The Hudson, however, stays out of reach for a while and one has to ride up high on its banks, above the Henry-Hudson Parkway. It’s a short and steep climb but surprisingly, at the mid-run mark, hills are getting easier to negotiate. I texted Marie to report on my progress. The lungs were fine since I was taking it easy, but with 20 km (or 12.5 mi) to go, I was a little worried as my joints were already becoming moody.

From there, I ran along the mostly invisible highway, leaving Inwood Park behind me and passing by the Cloisters. At the George Washington Bridge, tenth bridge marker of the run and which leaps over the Hudson to New Jersey, I crossed the highway, dropped to water level and settled on the path that would lead me to my goal. I was now some 25 km or 15.6 mi into the run and was getting definite tension and pain signals from ankles, calves, knees, hips and neck. They would stay with me till the end, only worsening. I guess that’s unavoidable.

The Washington Bridge is the last surface link to the neighboring NJ state. South of it, all connections are either maritime or underground until Staten Island. The very soul-shaking element when reaching this bridge on a long run down to the bottom of Manhattan is that the eye suddenly gets to peak towards the southern horizon and looking down south, the last buildings visible are those of Jersey City. While they were sitting across the river about flush with my own goal in Manhattan, they appeared so far away that I briefly considered a cardiac arrest as a better solution.

From then on, it was all about discipline, mind over matter. The mind was mine and the matter too, unfortunately. Pain would accompany me to the nondescript finish line. The fluos were back with a vengeance. I ignored them. Grand-mothers would dash passed me, I ignored them too. I would manage to overtake walkers only to have them pass me again during my brief walking intervals. I had tumbled to the very bottom of the running pit.