We have looked at the land from a settler's perspective, time for a bird's eye view
Airborne, Karoo Trip, Photoblogs, South Africa

This will be the closing Karoo Parenthesis, the images having mostly been shot on our two-hour-long first leg of the return flight from Cape Town after the Karoo trip last August.

Strangely, South African Airways flies its largest planes on the short haul to Johannesburg, and while the same aircraft sometimes simply refuels and actually takes us to America, this time the older Airbus A340-300 stayed in O.R. Tambo and a A340-600 took over for the crossing.

After taking off towards the south on runway 19, we did a climbing left turn over False Bay and back to the Flats, onward to what I think was a non-standard departure direct to TETAN, a waypoint opening the UZ2 high altitude airway to Johannesburg. Yup, that’s geek talk to myself. This took us just a bit to the right of Stellenbosch which I missed along with Paarl, being on the right side of the bus. But I got a great view of Strand and the Sir Lowry’s Pass in the background, then the Hottentots-Holland mountains and the Berg River and Theewaterskloof dams. 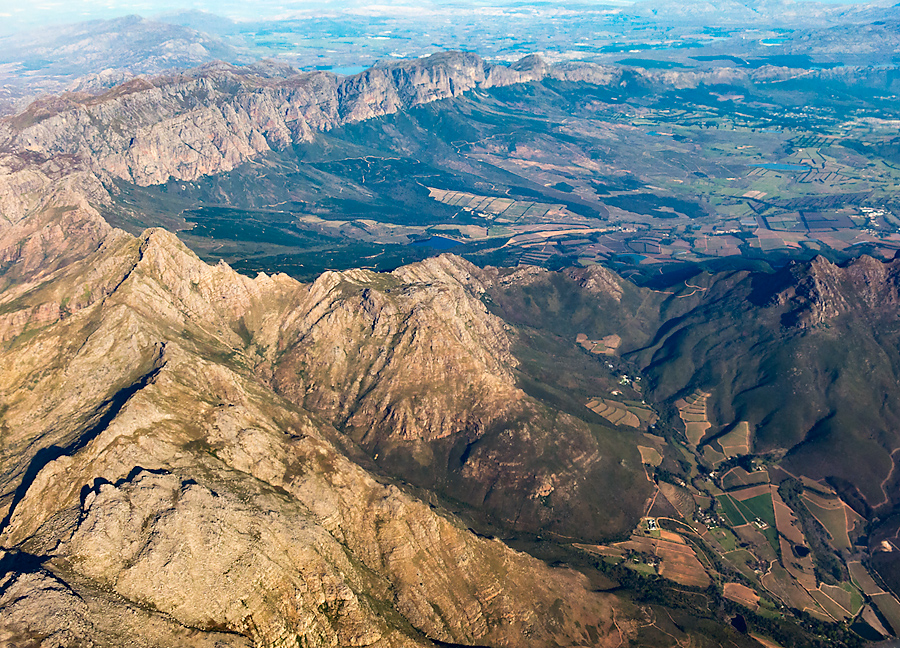 Further north, I caught a glimpse of the Soitec Touws River (44MWp CPV) solar energy plant, quoted by some sources as being the largest in the Western world. It might be a mixed blessing though as CPV (concentrated photovoltaic) does not appear to have such a bright future.

As always the Karoo revealed a surprisingly colorful landscape reflecting its convoluted geological past. The lush Free State followed with its kaleidoscope of agricultural tenacity. Late in the flight, descending into O.R. Tambo, we overflew mining operations and I pondered the strikingly geometric mine dumps of the Welkom gold field and then the evident depth of the Voorspoed diamond mine, gaping hole dug into the earth’s darkness by the masses for the shining benefit of the few. I dared not even imagine the suffering and utter poverty which, right below me, day in day out, were yielding some of the world’s most covetted riches, to be greedily acquired and remorseless battled for on faraway greener yet meaner lands.

As always, bear with me when viewing these images as they were all taken through glass or thick plexiglas, from miles above the ground, in impossible light conditions; they are often smeared by the heat blur of jet exhaust and are very hard to color correct because of the materials they were taken through, so they must be enhanced to compensate for atmospheric light scattering and haze. Still, like all aerial shots, they make be marvel at the beauty and complexity of our planet seen from the air.

Oh, and since this was about coming home, I anachronistically added a few shots from a flight back from Montreal to La Guardia a few weeks before the South Africa trip.

If you like this kind of top down view, make sure to visit the Africa from Above and World from Above galleries on VMP.