Well it took weeks for the weather to settle and for me to get my act together, but today I finally found myself airborne, paragliding over Hermanus.

I’m afraid I have nothing to brag about, though. Up at 6:00 AM, I did three hours of driving round trip for a total of 275 kilometers and managed to squeeze an 18 minute flight out of my day. It was my fault. I was impatient. 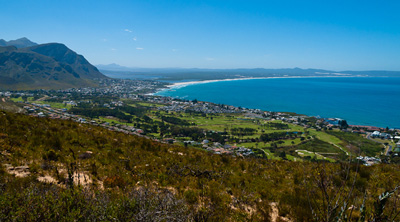 A view of Hermanus from the top of the ridge

I arrived in town around 9:00 AM and drove directly to the Hermanus High School whose sports field I would be using to land if I could not top-land. Being a chicken, I always try to do a brief inspection of an unknown landing zone to evaluate conditions, wind direction, obstacles and, when possible, to clear my way with the proper authorities.

I was received graciously by the Principal who offered me a seat in his office, awakening a long-buried load of mixed emotions. We chatted for a while, discussing global warming, the need to avoid landing on top of students or rugby poles and school budget. Then I thanked him for his time and the use of the field, climbed back in the Kombi and headed up the hill.

The Wind Guru forecast had called for the weakest winds to be around 10:00 AM for that location. It had been howling for days and when my wind meter read no more than 10 to 15 kilometers an hour at precisely that time on the ridge above town, I turned my back to the slope, grabbed my A risers in one hand, tucked gently on them and the glider rose above me in a well-behaved fashion.

But I had overestimated thermic activity. Even on a hot day, morning isn’t the best time for thermals to climb along the ridge. I managed to buy some time, scraping the slope at barely the same height as the launch pad, but could never climb high enough to consider top-landing.

Unfamiliar with the site, I didn’t dare venture too far away from the landing field, making sure I remained within gliding distance of a safe landing zone. Eventually, I was well below launch and had to let go of the slope and head for the LZ.

I did a straight-in approach and was granted a peaceful touch down in the left part of the school’s very well maintained field. Students were gathered at the other end of the grass on spectator benches, singing and clapping some school chant and I might have distracted them briefly, but I made sure to land as far as I could from them and proceeded to fold my glider swiftly.

The toughest part of my flight remained. I left the paraglider in the school’s small kitchen with the blessing of the lady who ran the show from the main hall and, covered in sunblock, walked out of the school grounds and into the hills.

It was hot. It was surprisingly hot. The ridge is only about 300 meters high but I sweated every single one of them. I fetched the Kombi, drove back to school, collected the glider and was on my way. If energy had remained, I probably could have waited and flown again, this time managing to top-land. But it was a big chance to take and I was burnt out, quite literally.

Oh well. It was nice to be aloft. I’ll spare you the Da Vinci quote this time because while it rules my life, it might bore you to tears. Still. Hermanus has potential. I’ll be back.