As Marie, sender of the goodies below, is flying at 35,000 feet across not-always-so-quiet Southern African skies just below the speed of sound, on her way to Amsterdam for a few hours layover and then a great circle hop across the Northern Atlantic back home, I am continuing the Biltong Experiment.

It’s not looking so good. Mold fungi, it appears, is long lived.

It all started months ago with Marie’s blessed obsession.

Since I had not been able to make it down to South Africa with her this year, she decided to mail me the quintessence of all South African foods, biltong. Repeatedly. The first shipment, surprisingly, arrived intact and delicious. I feasted and the kitty achieved nirvana.  All subsequent mailing attempts, unfortunately, failed miserably, victim of the ever-evil green mold (right).

Biltong, it would seem, does not travel well.

But here is the result of the last crusade. A defiant last stance, two entire sticks of biltong – rather than the usually sliced product – were sent in the mail, and alea jacta was. They arrived horribly covered by a thick layer of the nastiest green mold. But they were huge and, I figured, worth a rescue attempt. So I carved and trimmed and leaned, ending up with a few rather healthy looking cubes of red cured meat, definitely not original-looking, but promising nonetheless.

Below is a snapshot of the goods, right at carving time and just before sampling. They were delicious, and the kitty concurred. Notice that they were served along with a very dirty, pickled field garlic shaken vodka martini. 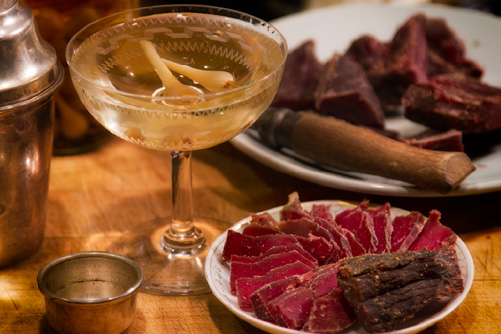 When Marie flies out of Schiphol tomorrow around 12:30 UTC – or Zulu time as it is said in aviation jargon – I will probably know for good if the experiment has succeeded against all odds or failed miserably. As I write these lines, new mold, feeble but tenacious, as white as the softest cumulus cloud upon birth, is raiding my surviving biltong bits. It might just be that once taken abroad, biltong leaks its magic out and the spell is lost.

Just as Reggae taken away from the laid-back and languorous Caribbean beaches misplaces most of its charm, biltong is probably landlocked to the southern tip of Africa.

Not a problem, I know the way back there.