Cape Town to the Namib Desert – A stretch?

Always, On the road

This is the stuff dreams are made of. A road trip from Cape Town to the N 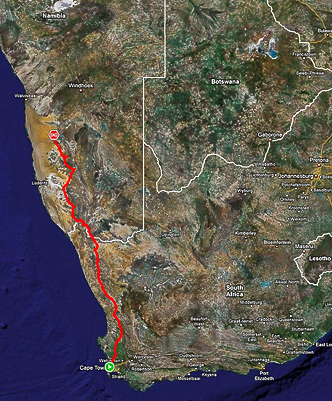 amib Desert. One border and 2000 kilometers on African roads in unknown conditions, in the peak of summertime, with no cell phone reception nor wi-fi hotspots, aiming for the oldest desert on Earth and the most incredible landscapes one can imagine.

Of course, the word dream implies many – still – loose ends, including securing the use of said vehicle, swallowing the cost of fuel, leaving loved ones behind when they thought they had finally been granted the luxury of our company, and finding the guts to actually hit the road.

But as with any dream, anything is possible. The three or four cameras invited on the trip would go nuts and ample material would be collected for later publishing.

And most of all, the limits of a daily reality would be stretched yet a little further and deeper than once thought possible. The envelope would be pushed a step closer to the edge and souls would soar a little higher, stoned by freedom, inebriated by raw beauty and hardened by a tougher commitment.

Wishful thinking? Not quite. A lot remains to be evaluated and probed but it’s feasible. It’s actually quite possible. Heck, it’s almost tangible.