A bit unusual, this route features two rivers and a mix of crowds and solitude
New York, Photoblogs, Running

I recently went for a Sunday run around the northern tip of Manhattan. Summer was coming to an end and people were out and about, determined to suck every last bit of marrow out of life.

Aiming for a fifteen-kilometer route that took me straight back home, I rode the no. 3 subway a few stations north, to avoid about twenty blocks of nasty street running. I started the run at the top of the Harlem River Driveway and followed it down and northward-bound, crossing over the FDR and landing about half-way up the Harlem River, with the Bronx a stone’s throw away on the opposite bank.

Some kind of bicycle tour or leisurely race was coming down towards me, possibly circling the island. The path is quite narrow in that area and meeting the bikers head-on was difficult. I initially squeezed or came to a stop out of respect, but realizing that the majority of the cyclists zoomed by and ignored me, I decided to ignore them back and forced them to slow down and aim carefully. They came towards me with jaws tightened by a mix of effort and doubt. They were far from all being pros. 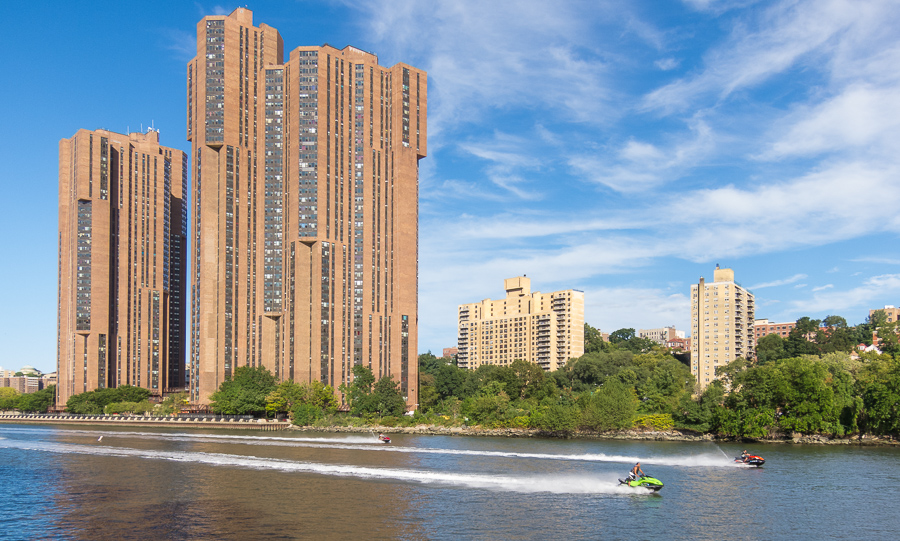 Jet-skis were buzzing the river like dragonflies and a few fancy cabin cruisers passed by, but the Harlem River is not the main navigable way and hardly any commercial traffic ever comes this far. As I progressed north, the path widened and grass finally appeared, narrow damper from the FDR highway. Sandwiched between the river and fast traffic, open skies to the east and green looming cliff to the west, this isolated stretch of riverside is typically rather empty.

But on weekends, it fills up as people from nearby boroughs pour in from the top, setting camp right along the path for picnics that last most of the day. Entire families and groups of friends carry in and setup elaborate kitchens, BBQ’s and awnings, attaching balloons to their outpost like flags on a military base. Loud music plays to cover the roar of cars rushing by, the smoke of meat cooking on gas or more rarely on wood fills the air and adults mingle, eat and drink while kids play, carefree and mostly care-free. They have all dodged the crowds of the city, only to reform as a crowd in their very escape.

The smells were actually pleasant and when I eventually left the river behind, it was with thoughts of roast chicken and hamburger sizzles. I now had to run across Harlem to the Hudson. Dyckman Street was hosting some kind of market and most shops had tables out, making running nearly impossible. I alternated between jam-packed sidewalks and the street, alert and anxious to get out. Cyclists from the race were still coming down the street, having probably followed my route in an opposite direction.

I climbed for a little while on Riverside Drive to get over the neck between the Fort Tryon and Inwood Hill parks, then twisted my way around and angled south, passing under the northbound lanes of the Henry Hudson Parkway and running next to it for a while. To my right, a thick canopy of jungle-like trees dropped steeply down to the southbound highway, then the to railway tracks, and further down to the Hudson which shone warmly in the afternoon sun.

Yes, this is still Manhattan!

One doesn’t think of Manhattan as being hilly and lush, yet I was running up and down through an odd mix of highways and exuberant forest. I eventually reached the double-level George Washington Bridge and dropped down under the road and over the highway to the footing of the east tower, where I stopped briefly at a funky little red lighthouse before resuming my run along the water.

There were many more picnics going on and hundreds of people were enjoying the weekend. Basketball courts, baseball and soccer fields, playgrounds and every other inch of public space was put to good use. I ran down to 125th Street and cut in, branching on to 127th where I remained all the way back.

It will have been one of the last summer runs of the season. Soon, the colors will warm and the air will chill. Streets and parks will empty, cooking smells locked indoors, and running will once again be a solitary adventure.

Bear with me for the pictures, I only had a point-and-shoot and barely stopped long enough to steady the camera. This is just meant to be a short tour of yet another of the many faces of the Manhattan Island.