We packed up early and left the Vleihuisie with a tear in the eye. Then it was back over the hills and onto N9, direction Ladybrand. Reaching Middelburg, we branched off to the east towards Burgersdorp and Aliwal North, 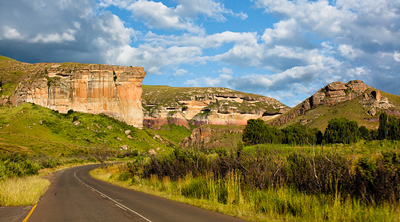 which we reached in good time. We were now ready to climb off the western flank of Lesotho.

Aliwal North marked our passage from the Eastern Cape to the Free State. Our old friend the Orange River flowed through town on its winding way to the Atlantic Ocean where it would form the border with Namibia. We headed north on R26. That road pretty much followed the neighboring country and was in incredibly bad shape, a minefield of deep potholes to be avoided at all costs and that had cars swerving dangerously across the full width of both lanes.

When we finally entered Ladybrand in early afternoon, we were just a few kilometers away from Maseru, the capital of Lesotho which we’d decided to avoid the next day by crossing into the Mountain Kingdom further north, towards Tsehlanyane National Park in the Maluti Mountains.

Ladybrand, against all odds, was a shock. Bigger than we had anticipated, the town was also disgustingly busy, ugly, hot and disorganized. Most of the central streets had been dug up in some global repair or improvement effort and then left as is, the funds having either run out or been diverted to sleazier pockets. Downtown looked like a war zone with a bit of a Central American or Southeast Asian anarchic twist to it – bustling activity, dirt roads, dust, chaos.

We tracked down the Tourism Office promised by our brochures, hoping someone there could recommend decent accommodation or safe camping within that big

mess of a place, but said Office was found closed, no reasons given despite a weekday afternoon. A nearby internet cafe allowed us to retrieve information online about our next leg and while Marie was negotiating Gmail on a slow connection, I drew the map out and thought hard and fast.

Ladybrand was a nightmare. My idea of camping there had just been a bad one. But we had driven steadily from Nieu Bethesda and could possibly make it all the way to Golden Gate, past our Lesotho entry point, by the evening. It would mean an extra 200 to 300 km of driving. We didn’t have a campsite booked there but they might agree to change our future booking. The campground was unlikely to be full and would certainly be thousands of times prettier than Ladybrand. Sitting in the Landcruiser, I looked up from the map and scanned the street around me. Noise was ever-present, and smells, too. A poor man was crouching behind the car, taking a break if nothing worse, after begging non-stop for at least a few minutes. I made a mental note to avoid him when backing up.

Back from the cafe, Marie was easily convinced. I could almost hear relief ooze out of her skin. We hit the road again. Flicksburg, Fouriesburg and Clarens flew by as we drove along Lesotho, so close we could now actually see the typical Basotho rondavels on the other side of a deep valley. We arrived at the National Park’s 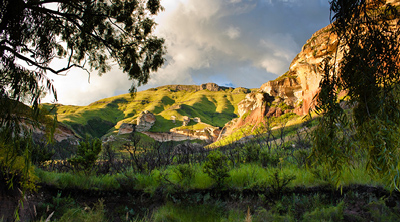 gate around 5 PM. Exceptionally, the road crossing the Golden Gate Park is a public one, leading from one side to the other. We registered at the gate and were let in.

The Golden Gate National Park, not to be confused with its American counterpart and the bridge that goes with it, lies at the northern foot of Lesotho’s Maluti Mountains. It is a relatively small park with its campground located at the western entrance.

A very unfriendly lady – this is a rare thing in South African National Parks – refused to transfer our down payment for the upcoming booking and we just started from scratch and got a campsite – with power. However once investigated, it appeared said power was only meant for caravans and thus required a special blue plug we didn’t happen to own. I scouted the entire campground, didn’t find a solution, then checked the Park’s convenience store and discovered the blue adapter for the price of a night’s stay. I passed. We would have to get by without power. The fridge, the fantastic little fridge, would need to be left alone and shut for the night, and was likely to stay cold enough to preserve our supplies.

After getting a dispatch from a well-informed source that warned us about Lesotho Border Officers confiscating any and all alcohol brought into the country, we had parted with a few of our wine bottles and donated them to our hosts at the Doornberg Farm. But we still had 4 bottles of red with us, and in preparation for the next day’s trip into the neighboring country, we decided to leave 3 of these hidden behind at the 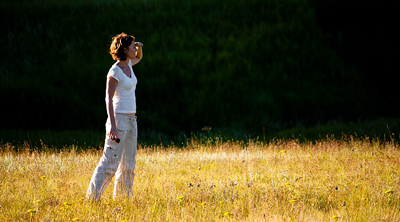 campground and retrieve them on our way back. I crossed the beautiful little stream that flowed right next to our tent and hid my bottles carefully out of sun and sight, behind a log into tall grass.

The campground was nestled in a narrow valley at the foot of an immense stone wall that strongly reminded me of Zion and Arches National Parks in the U.S. As the sun set, rather early because of the surrounding mountains, the cliffs above us began to glow in a most beautiful palette of orange tones.

The site was a bit noisy though, because of the road’s proximity. A campsite within a park normally quiets down after dark when campers have all arrived but this one was different; cars and trucks were still driving by on their way through, and we lamented the obvious lack of regulations that allowed engine brakes and motorcycles to destroy the peace. The campground had been located on an incredibly stunning spot and the price to pay was relative noise. The campers were noisy too.

We got up early and hit the road to Lesotho, but this will be another story by itself. Two busy days later, we were back at the Golden Gate Park to consume our 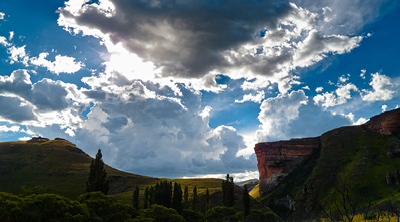 original booking and the down payment. We chose a much better spot, away from everybody, and settled in for a rest. I ran to our previous campsite, where a young couple were enjoying the afternoon laying down on their backs and looking up at the cliffs, and crossed the river with a mysterious smile. Their gaze followed me, a mix of curiosity and suspicion. When I crossed back towards them with the 3 wine bottles in my hands, they looked perfectly puzzled. I explained and they laughed. I exulted. We would have wine for dinner.

In the morning, Marie and I went horseback riding. She was dying to get back on a horse and had booked a tour with the park rangers. She had asked if they catered to all level riders and they had said yes. So she had requested a horse-horse for herself and a donkey-horse for me, since I hadn’t been on one since the day my cousins’ tall brown beauty Copain had ejected me while jumping over a fence some forty years ago. As it turned out, I got the horse and she got the donkey. Mine obeyed simple commands, hers didn’t and stuck to the next horse’s buttocks no matter what. After a while, we switched mounts. 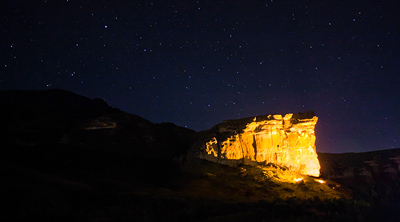 I figured Marie would, better than me, appreciate a horse that knew the meaning of desperate stopping signals.

A family of 4, South Africans from Gauteng, joined us for the ride. Two rangers were accompanying, one leading and the other trailing. The horses were short, Lesotho-style, and as is often the case where tourists ride, accustomed to following their leader – which meant that directing them individually was nearly hopeless. Those folks from Gauteng turned out to be a major handicap. The girl fell off her horse while it was walking and decided she’d had enough, posing the rangers a problem because they’d have to split up to take her back, which they elected against. Because of the family, we did most of the ride at a snail’s pace, the girl being towed behind the second ranger. Marie bit her tongue and swallowed her frustration. Only towards the end did the leader dare a restrained canter and some of our steeds finally followed. I managed to stay atop mine.

But the scenery was just worth the trouble. It was all like I had 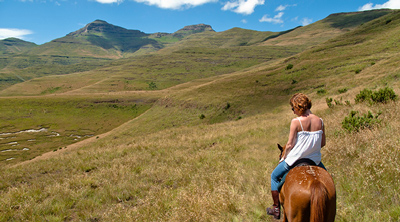 imagined in my childhood dreams of cowboys riding across green fields and onto harsh desolate mountains. There was no noise other than the wind, rare birds and the mythical sound of horseshoes on the path. I let the animal’s slow rhythm rock me, I melted into the saddle, tipped my hat low on my face and caressed the stock of an imaginary Winchester by the pommel. The dream was all around me. I’d finally arrived.

Once back at the campsite, we took a drive on a couple of paved scenic loops within the park. It was late afternoon and as the golden hour set the mountains alight, we realized how well named the park had been.

The gate, as it turned out, not only allowed safe passage to a set of golden cliffs but also into one’s own mental imagery. As is often the case, beauty seeks itself. And maybe, by enjoying and appreciating a beautiful moment in a beautiful place, would we become a little better ourselves.