Pelham Bay Park has lost some of its novelty but still manages to act like nature
New York, Photoblogs

Still a good hour north of us despite our Harlem incursion, Pelham Bay has also become a little more accessible. Surrounded by highways and Bronx suburbs, the park features a lot of tidal shoreline and some tick-prone thick woods.

On our last visit, an encounter with a couple of deer confirmed the tick theory, but it was very early spring and we escaped unharmed. It was nice to see them within the city limits. 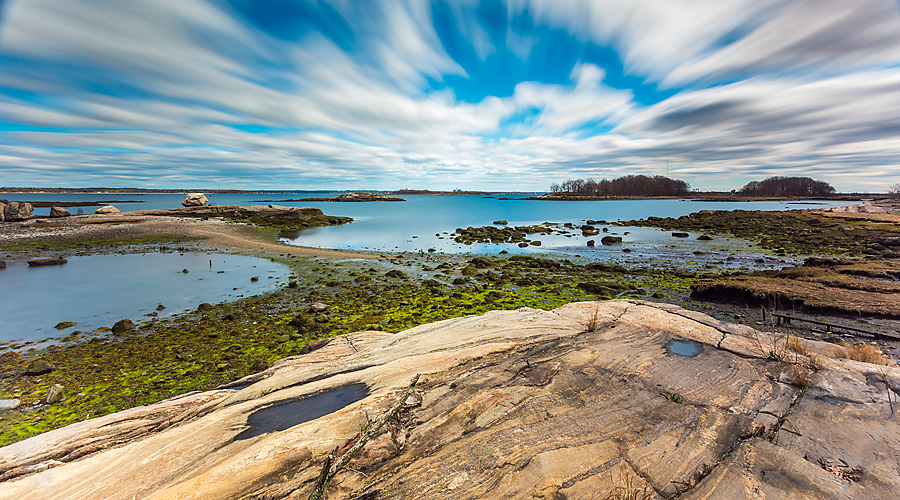 A group of weekenders was having a party on the promenade, music blaring and booze barely concealed, but the beach was deserted. It will be weeks before it fills up with oiled bodies and sandy towels (or vice versa). Luckily the trails remained relatively clear.

We found edible plants but had brought a picnic with us and ate it hungrily on a rocky outcropping we visit ritualistically. Time slowed for a while, and yet a five minute long exposure showed clouds on a mission.

Planes were flying low on their approach to LaGuardia, constant reminder of civilization’s proximity. It surrounded us on most sides but as I have probably said many times, Pelham Bay Park is secluded enough to allow one the luxury of completely ignoring the Bronx around it.

Yes, that might be a bit of an ostrich’s attitude. What can I say, they have a point. New York City is so much prettier and peaceful with your head stuck in a park.