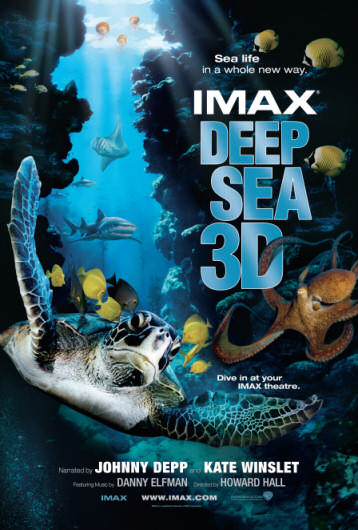 view of its inhabitants?

Well you can. Take a few days off the beach on your next vacation and learn to dive. It’ll change the way you look at the ocean forever. And I know what I’m talking about.

Or there’s the next best thing: buy yourself a ticket to the new IMAX Deep Sea 3D movie and get ready to be amazed. Because you will be.

Oh, it had been done before; BBC’s Blue Planet enchanted us with first class underwater footage and MacGillivray Freeman’s The Living Sea and Coral Reef Adventure toyed with the IMAX format. But these were two-dimensional only. You were watching someone else’s vision, however beautiful, replayed in a flat approximation of the reality.

Deep Sea 3D takes you below the surface, places you behind the camera, a mask on your face, and then quietly backs away, leaving you on the reef surrounded by fish and coral. You ARE there. The only thing missing is water.

The experience is simply amazing. Many species of sharks swim right at you, giant Humboldt Squid dart across the darkest night, flashing furiously with the pleasure of the hunt, Manta Rays gracefully loop in front of you feeding on plancton, comical Green Turtles do a pit stop at a cleaning station and get their shells picked clean by a battalion of colorful fish, a bright red Rainbow Nudibranch dances like a ballerina in mid-water, jellyfish wage lethal wars against each other, coral spawns in an inverted snowfall, and they’re all so real and close you could touch them.

The movie was filmed on nine locations around North America including the Sea of Cortez, the Channel Islands, the Outer Banks of North Carolina, Flower Gardens in the Gulf of Mexico, the coast of British Columbia and Kono (Hawaii). The final 40 min. long movie was edited from 70 miles of footage! Coral spawning is an event that occurs only once a year and lasts less than a day; the shots were filmed in the Gulf of Mexico, hours before the arrival of hurricane Katrina.

And the best scene remains without a doubt the last one, where cinematographer Howard Hall, in a stroke of genius, breaks away from the sacred rule of a human-less documentary to include in the frame a few divers interacting with a curious right whale near a sandy bottom, giving us a fantastic sense of perspective and dimensions.

What would have been a great movie in 2D becomes a stunningly spectacular experience enhanced by the 3D technology.

You just gotta go see it! 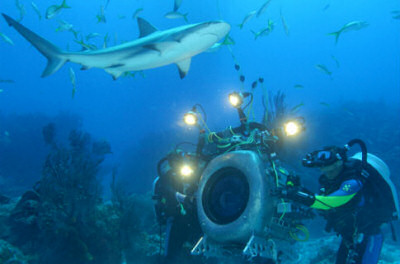 From a technical point of view, the revolutionary IMAX 3D is as spectacular. It involves the use of twin high resolution 15/70mm film strips for simultaneously recording the equivalent of the two images seen by the left eye and the right eye, and a special projector that runs the two rolls of film passed twin polarized lenses so that the audience’s polarized glasses can channel each one seperately to the corresponding eye.

Read more about the movie in the official Production Notes (in PDF format).