A few nights ago, Marie and I were established in yet another glorious picnic in the Brooklyn Bridge Park, further south this time, away from the big lawns – which were closed – and onto some rocks by the tidal pools. 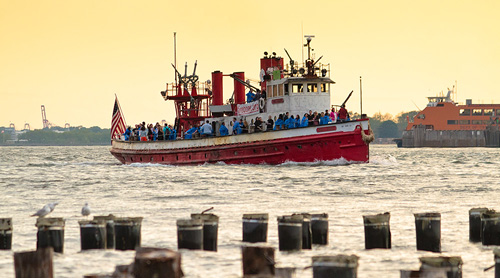 The juneberry trees behind us were loaded with very ripe fruits, water birds played at our feet, an empty Coke can rang a tidal symphony, afloat against the rocks, many boats danced the bigger part of an aquatic ballet over in the channel, planes approached and departed their three respective airports, helicopters buzzed around like noisy flies, the sun sank slowly, the wine was sweet. It was a typical New York evening.

Then our attention was caught by high water columns, far across the water towards New Jersey. There were no cruise ships around, Carnival and Princess giants having long sailed from their Hudson and Brooklyn terminals towards warmer latitudes. We had to Google it. As it turns out, the retired fireboat John J. Harvey was just having a blast by the Statue of statues – for the heck of it I guess, and also obviously because people were partying on board.

The 130 foot long John J. Harvey was launched in 1931 and is said to have been one of the most powerful fireboats ever in service. She was Marine 2 when she retired in 1994, and was later temporarily back on voluntary duty on September 11, 2001, when she pumped water at the Ground Zero site for 80 hours until supply was restored to the ground-based fire crews.

So I took a picture of her. Pretty boat.