Four Owls and an Osprey

That Easter Sunday, eggs had long hatched so instead of down, I looked up
Fauna, New York

After two Staten Island weekend outings in a row, we worried that our necks might turn red—mine actually was pinkish for the lack of sunblock—and instead steered confidently north to the Bronx.

Landing in Pelham Bay on a sunny Easter Sunday was nothing short of paschal. The immense parking lot was bustling and the usual driving chaos prevailed. Hundreds of people were setting camp up on the grass for communal BBQ’s and hundreds more lay on the sand like sardines, begging for UV to do its duty. It was a windy afternoon though, and sandy gusts peppered the beach in a rough blast that made us retreat to the relative calm of the woody peninsula in search of forageables and birds. 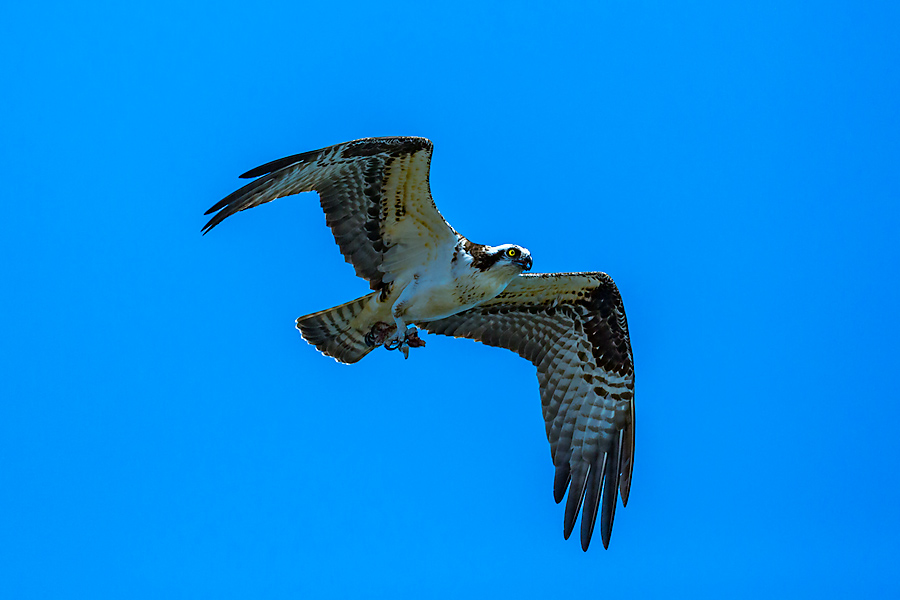 The osprey with a fish tail

The harvest was good and filled both memory cards and Whole Foods paper bags. Marie focused on Japanese knotweed and I, on an osprey first spotted not from its sleek silhouette on a tree but rather by a gathering of binoculars. It was sitting on a high branch, holding something I could not quite identity at first. When I caught up with the bird a half-hour later, I realized it had been dutifully clutching a fish tail. The bird had taken off to sea, flown around, come back and was still holding on to it. Either the food was meant to hang and age or Osprey Jr. was not yet back from school.

Later, we walked by the area where birders had shown us a great horned owl nest, many years ago. Marie remembered the spot much better than I did and sure enough, the old dead tree was still there. I was ahead on the path walking like a fox—as though that could make a difference to owls but my osprey had seemed annoyed despite my absolute immobility—and suddenly stopped in my tracks: “They’re there,” I mouthed, “three of them!” 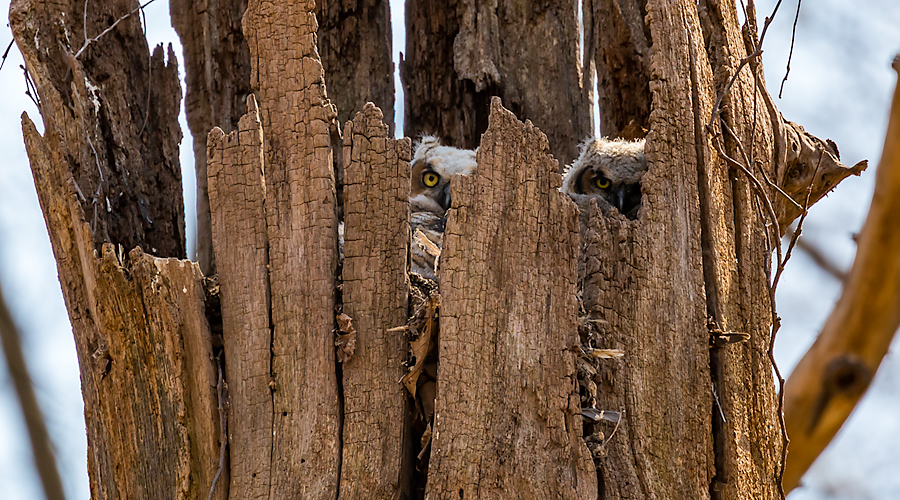 They seemed alert and were staring at me. Caught off guard, I fumbled a few shots on generic camera settings. Then I moved in and positioned myself the best I could, tweaking the camera into Spot Metering to focus on the feathers and avoid the surrounding bark and switching back from Mode II Image Stabilization to Mode I as there was no need for panning.

These are not the best pictures in the world, the dead tree is tall and was backlit, but how often does one run unexpectedly into a trio of owl chicks staring down intermittently from the top of their tower—through the probable stench of guano and rotting meat—only to fall asleep a moment later, momentarily oblivious to the world below?

I eventually spotted one of the adults, also seemingly fast asleep on a tree fork nearby. The pair is said to have nested in that area for over twenty-five years. I wonder where their young go once kicked out of the proverbial nest…

With storm clouds on the horizon, we retreated back to Brooklyn in the bubble, checked ourselves for ticks, and I cranked up Lightroom. I don’t think I ever opened my toy chest as a kid with more pleasure than I feel when Lightroom starts up and I import a day’s shots for developing. This is a peaceful time for sorting things out, peeling off layer after layer of acceptable images until, with a bit of luck, the true gems are revealed. And like diamonds, even those are raw, and much refining is needed to make them shine.

To remind me of this, the customizable heather in my Lightroom top bar reads “Here There Be Magic”.

As a bonus, you can click here to see a couple of graphic depictions of what the osprey thought of me. As always in my slideshows, use the arrow keys to move forward.
0 likes
6 Comments
earlier post next post