From Prince Albert, we drive through the mountains and back in a long loop
Karoo Trip, South Africa, Stories

After an eerily silent night, the end of the road equating to absolutely no traffic or human noise in an already deserted space, I get up early and, remembering that we have routinely forgotten the plunger for our stove-top espresso maker, I use the conveniently supplied replacement and prepare our traditional breakfast of coffee and rusks. Granted the luxury of a choice of terraces, we opt for the sun-facing side and warm up as we watch the mock-up savanna below us come to life.

Our rental giraffes soon appear, their pet zebra in tow, and after a few crude comments about the latter’s unfortunate situation by a long-gone yet ever-present foulmouthed kitty, we focus on our smoking cups and begin to plan our day. The loose goal shall be to hop into the mountains to the south, retracing our 2008 steps up the Swartberg Pass, and simply see what happens next.

From the top of the Swartberg Pass

In 1888, a South African civil engineer named Thomas Bain completed an ambitious project linking the town of Oudtshoorn in the Little Karoo to Prince Albert, cutting through the Swartberg range and into the Great Karoo. Twenty-four kilometers long, the Swartberg Pass was completed in four to seven years—depending on the source—and bears the sweat and suffering of slave labor. It reaches up 1,575 meters above sea level and, a national monument, remains unpaved to this day. Marie at the wheel, this is where we head up.

While not as dramatic as the Drakensberg’s Sani Pass, this one remains steep, impressive and sudden. Oppressive dust-colored cliffs immediately surround us and we climb slowly through switchbacks, eyeing the drop-off warily. As always on South African mountain passes, for most of the climb there is absolutely nothing but gravel and shrubs between us and an unforgiving void. I suppose exposed roads are always more nerve-racking for the passenger who does not feel a symbiosis with the vehicle. I must be getting old. I have been much more relaxed practicing stalls and full spins in a single-engine plane, or even jumping out of said plane. O tempora, o mores!

A bit before the top, we reach the turn-off to Gamkaskloof, also known as Die Hel, an isolated valley tucked some forty kilometers away into the mountains and reached in two or three hours of rather rough four-wheel-drive action. We had visited it back in 2008 in the warmth of summer and birds and plants had captivated us. This time, winter is clinging to a ghostly landscape and low ethereal clouds shroud the surrounding peaks with defiant determination. We venture onto the road, drive a few minutes to convince ourselves—long enough to actually run into a trio of rare klipspringers which cross our path and bounce off into the velt—but this is different. Birds are few and flowers asleep. We backtrack and progress up the pass. 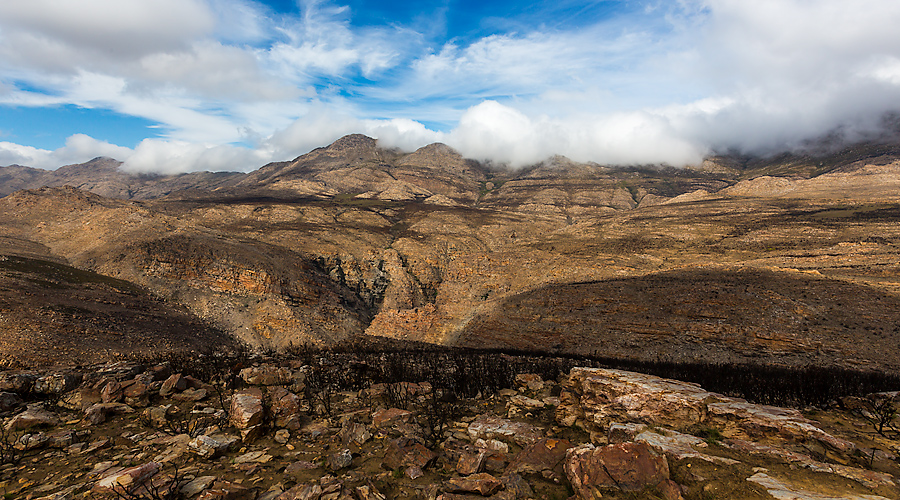 Clouds come down to meet us near the road to Gamkaskloof

Clouds come down as we go up. Near the top, they swallow us whole and we cross over to the southern side of the range in zero visibility. Further down, we stop for exquisite flowers and are surprised to see a cow grazing on the rocky slope, far above her normal grounds. An adventurer no doubt. We give her the knowing, two-fingers to the forehead salute and roll downwards.

Once we reach flatter lands, we decide to push forward and run along the mountains to the northeast until we get to another pass to come back, as there are only so many ways to cross the imposing natural barrier that separates the Karoos.

On long road trips, Marie and I have for years had strange habits. We come up with expressions, idioms, stories and characters that only we could ever understand, or even find funny. We are cartoonists without a pencil or paper. Voices take over. For instance, Mogashagasha our Landcruiser has a Japanese voice (she’s an import) and expresses her satisfaction loudly when we hit bumpy dirt roads or puddles.

On this outing, I’m afraid I am responsible for the two goofy stickies. The first is born from avoiding a dung beetle on a dirt road, or maybe squashing it inadvertently. The brain sometimes fires in weird, seemingly random patterns. A tune emerges in my head, a German Christmas song called Kling Glöckchen Klingelinggeling but with the words “Kling Glöckchen” replaced by “dung beetle”. If you know the song, sing it in your head with these words replaced, and you will know how silly one can turn with only a vast expanse of empty road ahead. We will be singing that all the way back to Cape Town and laugh every time.

And then there is this cute donkey in a field, whose sighting triggers yet another synapse misfire and without really thinking about it, I wave and say “Bye donkey!” and then answer to myself “You’re welcome!” and crack up. Only South Africans will understand. I guess none other than a Frenchman’s compromised ear could mess up phonetics like that. From that point on, we are going to salute all donkeys and thank one another through them too, causing irrepressible laughter and catharsis through silliness.

And of course, after the passing two years ago of Don Estorbo, cat extraordinaire and best-ever friend—yes we miss him still, every day, call us gooey—we have been talking in a cat voice. With an accent and much swearing. All animals have their voices, too, but I have long been criticized for rendering them in a single incarnation. The only one who manages to speak through me in a baritone, Jean Reno-like voice, is Ben the dead lab. But mostly, for hours on end, there are three of us in the car, chatting, joking.

Once in a while, after a long triangular conversation, we pause, ponder the embarrassment if anyone ever came to hear us, then shrug and launch right back in with delight, and a sadness that is smartly kept just under the surface. For the record, the kitty has left his job as elevator operator where he worked for a Mr. Otis, shuttling animal passengers between the mighty levels of Heaven and Hell, and now fancies a travel writer career. We let him take notes—we are all bloggers after all. 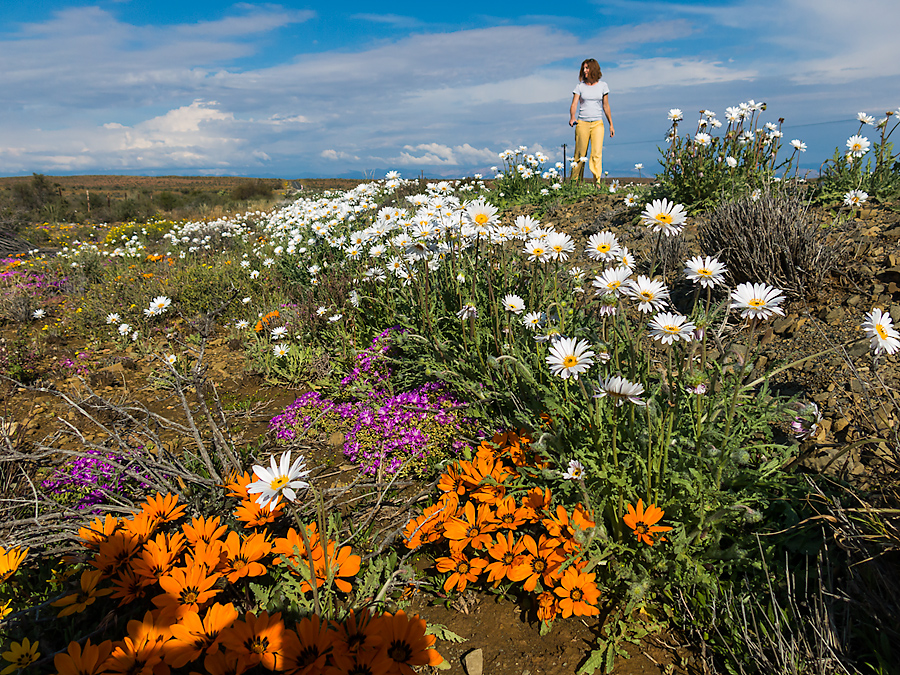 The day matures. Stopping to look at tiny flowers sprawling on the side of the road the way they had last year on our way to the Namaqualand, I am reminded that life always manages to embed itself in the most inhospitable places.

To begin, imagine being hundreds of miles away from any trace of civilization, feel the sizzling heat pour down on the landscape like red-hot molasses, witness the tempo of your days slowing down to a halt, restrict the notion of water to that which you carry with you, picture a world sandwiched between immense sky and endless dryness, remember the most incredible silence you ever noticed and multiply it tenfold, promote in your mind the shade of a small tree to the status of oasis and believe that even in all this harsh emptiness, there will be life.

You are now in Southern Africa.

Roasted in the Namib – By yours truly

The occasional mongoose darts off to the bushes and bright red rocks mottle the hills as we run east towards our return pass, Meiringspoort. Deeper it seems than the previous time, we slice our way through the mountains, disappearing at the bottom of narrow canyons, far out of reach of lingering afternoon light, and when we re-emerge into a flatter world, we steer sharply left and west, racing the night back to the farm.

This has been a long drive. At the wheel, I keep us just on the 120 km/h speed limit, watchful for wildlife lurking in the twilight. The kitty has fallen asleep and we become thoughtful.

Two years have passed. We have gotten used to it, but not over it. Darkness yields wishful thinking, like a freshly cleaned blackboard invites theory. So as miles tick by and shadows escape sideways from the halo of our headlights, and even though he has left us physically, I ask the spirit of a cat to stick around and fill our hearts, to keep us laughing and de-dramatizing that impetuous maelstrom called life.