I read about it in my youth. It is mentioned in the works of Balzac, Beaudelaire and Alexandre Dumas. Some even whisper it could have been the vector by which Napoleon was arsenic poisoned. Et après tout, with such a French name, I had always assumed Vin de Constance came from France herself. I was wrong. It’s South African.

to the late 17th century when the Constantia estate was created by Simon van der Stel, second Governor of the Cape. Around a hundred years later, a man named Hendrik Cloete bought the estate and he is credited for having raised Vin de Constance to international fame. It is said that the great figures of that time, Kings, Queens, Emperors and their assassins, drank more of it than any other wine, despite – or maybe because of – its exorbitant price. Among them was Napoleon.

Towards the end of the nineteenth century, the vineyards were decimated by a type of pest called phylloxera and the sweet wine’s production came to a grinding halt along with bankruptcy. The estate was bought by the South African government for nothing.

Constantia, nested right against the inland flank of majestic Table Mountain, is a prime vineyard valley. Green is the predominant colour and beautiful wine estates are scattered around as if sprinkled by a mighty hand, most of them quite old and of Cape Dutch tradition, my favourite architectural style if I ever had one.

Last February, Marie, her mom and I went on a tour of the wine route. We visited the Klein Constantia and Groot Constantia estates which share most of the famous wine’s history. The facilities are modern, spotless and very impressive but the old buildings remain and this is where my focus and imagination were drawn.

Here are some photos of Groot Constantia’s old cellar, long replaced by a hangar-like room with shiny machines, but of such beautiful curves and still smelling of wine… 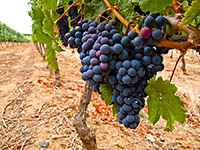