My ears are burning, did someone say Ubuntu?

“Once upon a time, in a faraway digital land, ruled a mighty king called Windows the 7th. He was very popular among his subjects even though described as unfair, moody, full of bugs and cheap. But most peasants had gotten used to a long, unflinching ruling by the Microsoft dynasty and while the king’s shortcomings yielded never-ending worries about his innumerable idiosyncrasies and utter failure to help the people feel safer and cared for, most went about their daily business and passed on, generation after generation, an inherited respect for the kingdom.”

“Many strange Microsoft kings had preceded Windows the 7th on the throne. Before him had ruled the short-lived and impotent King Vista, who had stolen the throne from King XeoPold the Great, longest lasting ruler of the Microsoft Windows dynasty. The Great had himself succeeded to Millennium King, crowned to celebrate the coming of a new era at the end of troubled times dominated by two sister queens, in ’95 and ’98 of the digital age. Most peasants had forgotten all about those dark years and very few talked about the old days of the dynasty’s rise to power, when the first Prince Windows was crowned at age 31.”

“King Windows the 7th was mostly unchallenged on his land but had a competitive neighbour. The nearby Orchard Empire stretched along a tenth of the kingdom’s borders, governed by famous Emperor Mac who lived in his Apple Province Castle with a snow leopard for pet. While King Windows the 7th lacked manners and was rough around the edges (and the waist), the emperor had always been known for his progressive policies, good behaviour and devilishly good looks. Emperor Mac might have ruled over a much smaller land but he knew how to gain the trust of his subjects and once they had recognized his appeal, they would never turn back. The empire was safe, crime rate at an all-time low. By comparison, the huge kingdom next door looked incredibly chaotic and security notices were posted weekly – when not daily – in a futile attempt at containing trouble.”

“It is thus rather puzzling to consider the relative peace that existed between both rivals. They would, most of the time, simply make fun of each other, with nasty arguments but no real escalation of violence. The truth is that their respective cultures were so radically different that there was room for both to co-exist.”

“The rest of this land was inhabited by many roaming races. The most famous among these was a tribe called the Linux. Their emblem was a funny penguin and they were few in numbers, and rather reclusive. Spontaneous diverging pockets were formed by natural leaders and each bent and shaped the Linux racial characteristics into new identities while retaining most of the original teaching.“ 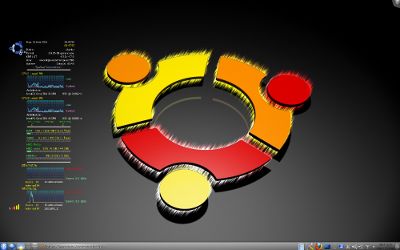 “One of these clans, the Ubuntu, grew strong and famous. The most important aspect of Ubuntu culture was that nothing was privately owned, and thus no one could get richer than his neighbour. In a tribe where greed was mostly absent, everything was free and all participated to the cause. It was called open-sourcing.”

“The Ubuntu were sophisticated, evolved people who cared about appearances and functionality. However, they were radically different and considered by most inhabitants of the kingdom and the empire to be either retarded or worse, geeky magicians whose tricks would come to no good. They spoke a strange language and since nobody understood them, nobody talked to them.”

Enough with fairy tales… Let’s get the same story from a few different sources.

“Mouaahahahahaha… Oh, quiet guys! Someone is, like, totally listening. Err, hi. You caught us on our break. We were just pondering the fact that we control something like 90% of the world’s home computing, and that all of it is like, super bugged and plagued by vulnerabilities and security holes. And best of all, every time we push an unfinished new version out, they all have to pay us to upgrade their bugs!”

“We don’t really care about the upscale, fancy Mac owners. You know? What-ever! They are, like, too cute, too few, too rich. Us, we focus on controlling the poor masses instead. Oh, and as far as Linux goes, free Linux, Windows-incompatible Linux, non-NTFS Linux… Mouaahahahahaha!!!”

“An Apple a day keeps Bill Gates away. We are the only ones in the market to provide fully integrated products, from hardware to software and from online accounts to music download. We are so pretty. We might cost an arm and a leg but being part of an elite has never been cheap, has it? Linux, Ubuntu and the likes are clever little cousins. Not quite all there, if you know what we mean, but they copied our eye candy and who can blame them? We are sooo pretty.”

My poor Windows 7-equipped laptop had been agonizing for a year, throwing at me random BSOD’s, complete freezes, spontaneous shut downs, registry corruption and other rather catastrophic events. I re-installed Windows a couple of times, to no avail. I had first suspected a software issue, rejected it for a hardware malfunction, then reconsidered and became totally confused.

When recently it appeared that we might need a back-up computer for a while, I decided to blame it all on Windows and after a deep breath, I installed Ubuntu on the laptop, in a dual-boot configuration.

Yes, I said Ubuntu. What do you mean, never heard of it? Just kidding; the average computer user has very few 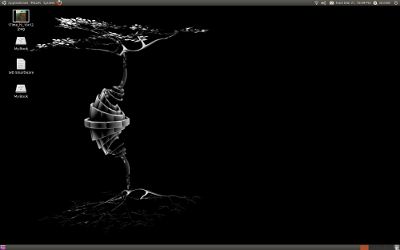 reasons to ever mingle with marginal operating systems. Until recently, I hadn’t, either.

Ubuntu is a free OS based on the Debian/GNU Linux distribution. It is open source, funded by commercial interests. Ubuntu is an ancient African concept roughly interpreted as “Humanity to others”. With a reputation for safety and reliability, Ubuntu has become an attractive choice as a Windows alternative. It comes bundled with lots of free software such as Firefox and OpenOffice, and lots more is available online. There is, however, one major caveat: being Linux-based, Ubuntu does not natively support Windows applications. In other words, there is no (easy) way to run your favorite Windows application on Ubuntu. Ouch.

But my test run was so pleasant that after enduring yet another crash under Windows, I finally took a leap of faith, wiped my hard drive clean – and Windows along with it – and installed Ubuntu as the sole operator of my desperate laptop. I was committed and there would be no going back.

I has now been a few weeks and not a single crash. This tends to confirm Windows was the culprit. I have studied Ubuntu carefully and gotten to really like it. So much so, in fact, that it now also co-exists peacefully with Windows 7 on my desktop computer. Why? Simple: re-li-a-bi-li-ty. If something happens to my Windows installation, rather than being stuck with recovery CD’s and a rather difficult access to my files, I’ll just switch over to Ubuntu and work from there. For now, my documents are accessible from both operating systems and the Ubuntu install didn’t require more than 10 or 15 GB of a separate partition. I gave it 50.

The first nice surprise when running Ubuntu is how polished the interface is. Much closer in design to the Mac OSX desktop than Windows’, both the native Gnome desktop and the optional KDE Plasma (which turns Ubuntu into yet another port called Kubuntu) are extremely clean, well designed and visually engaging. Eye candy might not be so attractive to some but I find it utterly important as part of my daily computing experience. Windows fly around the screen and wiggle when moved, then 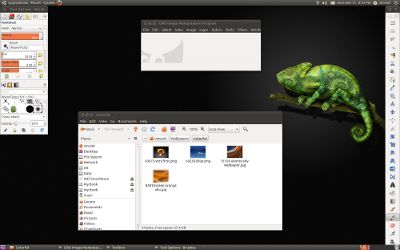 slide to the background when losing focus, multiple 3D desktops rotate in front of your eyes, widgets rule and customization options are limitless.

Additional compatible free and open source software can be installed directly from the OS without having to surf the web or look for related web sites. It has now become obvious that – except in the case of highly sophisticated applications like the Adobe Suite – there exist very good free programs to achieve just about any task commercial programs used to handle. This turns Ubuntu into a – potentially – completely free platform, with the exception of a few necessary proprietary drivers like those needed for high-end graphic cards.

I’m not saying that Ubuntu is a likely Windows replacement at all. It remains a geeky operating system dominated by the “Terminal”, a command-line application needed for most administrative tasks and without which some usability is lost. Most people don’t want to type code at a prompt to achieve what they need; that’s what a mouse and, yes, windows were invented for.

Still, I am very impressed with Ubuntu, an alternative OS fitting its niche perfectly and elegantly.