Roasted in the Namib, Part 9 – Epilogue

That day, again, it was a short drive inland to the Kersefontein farm, where we had booked a night. The farm came highly recommended and had been 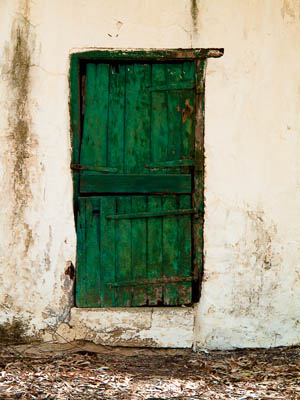 upgraded into a hospitality establishment by owner J., an member in good standing of the Cape Aristocracy who had been reported to be the star of the show.

We arrived early and, unannounced, were greeted in the courtyard by another guest, a friendly German who explained that our host had gone to town and would be back in a while. The staff weren’t sure which one our room was going to be, so famished, we settled for a picnic off the back of the Landcruiser, right in the middle of the place.

It was a pretty farm. The buildings were old and very Cape Dutch, arranged in a long alley framed by tall eucalyptus and surrounded by open fields. The main house, the size of a small castle, faced away from the alley and was theatrically enhanced by a neatly trimmed lawn and plane trees.

We unpacked our food box and opened the fridge briefly for some cheese and wine. Soon, we were joined by a couple of cats that obviously had long rehearsed their friendly act and began rubbing against our legs, tails entwined, eyes

begging and cuteness set to maximum.

But another strange farm character arrived soon thereafter and claimed our attention. It was a sheep. Its wool was long, incredibly dirty and smelled awful but the animal was obviously tame and accustomed to human presence. It immediately showed interest in our food and when nothing was given, it began some rubbing of its own, except the purpose was scratching an itch and the instrument, our car.

jokingly commented on the sheep’s buffing of the dirty Landcruiser. Secretly, I was having a hard time not chasing it away with my foot up its buttocks.

Eventually, a car arrived and we figured our host had shown up. He indeed walk over to us after having a chat with some of his staff, glanced disapprovingly at our picnic setup and said: “And who do we have here?” I thought it was a strange sentence and labeled him as different, but cut him some slack. We introduced ourselves and I noticed that Marie, who is usually outspoken and friendly, was staying strangely reserved and quiet. The guy did most of the talking. He showed us our room but spent too much time going on and on about his flying over the Namib Desert. He was a pilot. My slack probably cam from that knowledge.

He invited us to join every one at the bar at 7:00 pm and left, somehow managing to make it all look story-like, and he was the center of it. I half expected to show up at the bar and be surrounded by hunters

speaking about their kills as would have been the case in, say, Congo 50 years ago. There was an subdued smell of snobbishness in the air. Or maybe it was elitism, or even racism. But it didn’t smell good. As guests, however, we seemed to stand on the right side of things. For now.

We took a walk to a small graveyard nearby and I had a chance to inspect the owner’s Cessna that was parked by a dirt airstrip. The plane didn’t

impress me. It was dirty and seemed poorly maintained. Then we dressed up for dinner, to some extend, and headed for the bar. It occupied one of the many individual buildings of the farm, probably an old barn or stables of some kind. The walls were covered with aviation memorabilia, most of it old and military. We were among the first to arrive and being asked what we would drink, we decided for Greygoose Martinis.

J. didn’t really know how to mix them and seemed to improvise with much help from the assistance. They turned out poorly. Marie, intrigued by the decor, asked him what the link was between him and military flying. “I was a lawyer in the Air Force,” he answered bluntly, his tone putting an abrupt end to the subject, on the edge of rudeness.

More guests arrived and were introduced

to each other. My initial feeling of being suddenly thrown into a movie increased tenfold. The manners, the accents, the tones, the attitudes were all there. Too much pride. A touch of disdain. Carefully crafted attitudes. Polite but absentminded ears. Predominance of the word “I”. And very, very well hidden racial subtleties.

The sheep was given beer from the bottle by a young indefinite of J.’s entourage. A mysterious triangle had emerged between 3 males and left a pregnant woman aside. I was hoping my frowning was only inner-based.

We moved on to the main house for dinner. A long table had been set in a richly decorated room and everyone was attributed a seat upon arrival in an order that had obviously been pre-arranged and confirmed bizarre rules

while strengthening the triangle. There was a silent order casting its shroud at that table, the ruling of a class we no longer belonged to.

The conversation, like that of any dinner, began its roller-coaster around the table, never failing to return to the one end where sat our host like a king on his throne. He spoke a lot, always of himself or of things he knew best, and pushed the art of interruption to a masterful level. I could feel Marie’s blood pressure rise as she fought to avoid voicing out her opinions too icily when the topic became edgy, and it often did. I also noticed with

great annoyance that his colored kitchen staff were serving us without really ever looking at us, but constantly glancing towards their master. The expression on their face wasn’t very hard to place: they seemed afraid.

J.’s table might have been long, old and fancy, its food was nothing to write home about. In fact to this day, I have no recollection whatsoever of what we ate. Later, we were led to the adjacent living room and offered coffee. I must admit that the furniture was superb. There was enough in this house to create an impressive museum. J. obviously took major pride in this and he spoke at great length of the origin of this and that, but my attention span had began to fade seriously, and more worryingly, my stomach was rapidly getting quite upset.

Bats were flying over our heads and people were instinctively hunching down on their sofas and chairs, which seemed to amuse our host a great deal. My head began to spin and cold sweat washed over me like an arctic tide. The thought of throwing up in publi

c became too much and while Marie was withstanding the affected verbal assaults of a ridiculous little man, I suddenly stood up and left the room unsteadily, involuntarily banging the door behind me in my rush. I had planned to stop at the nearby washroom but found my way out of long hallways decorated with old paintings and headed to our room where I collapsed.

I’ll spare you the details. It was a painful night, and the morning only saw me feeling worse. The thought of having to get on the road and drive back to Cape Town was a horrible ordeal and I doubted even having the strength to get up. My stomach was terribly upset, I was dizzy and probably had quite a fever judging by the waves of cold and warm that got me to pull up the blanket

and then throw it away repeatedly.

Marie was so worried that she got me an appointment with a doctor in Cape Town. We were only an hour or two away. I wondered through my nausea if I had eaten something bad or this was just a bug, or maybe some tropical disease finally catching me off guard.

But against all odds, by 10:00 am or so, I was feeling a little better and we got under way. There would be no driving for me, but we still decided to stop briefly in Langebaan to see the stunning turquoise waters. We made Constantia in early afternoon and I spent my last energy

helping Marie unload the Landcruiser, while the corgis danced around us in pure ecstasy. When we were done and boxes and bags had been piled up inside the house, I excused myself and collapsed again on my bed, empty.

This was not the triumphant return I had envisioned. There would, of course, be lots of time for stories and slideshows. There would be many lively dinners, wine flowing along with the tales of our journey and more tales echoing from others, memories flying across the table like tennis balls on a court. There would be many long and patient hours spent at our computers blogging and processing thousands of photos. And there would, eventually, come a time for nostalgia and more dreams, and the cycle would start all over again. This had been an extraordinary trip.

But for now, I just needed to sleep.