Slingshot to Kruger, Part 4 – The Wild Song of the Olifants River

Perched high above the river, the Olifants Camp is one of the most stunning places in the park
Kruger Trip, Stories

Up before dawn, I glanced at Marie. A single strand of red hair emerged from underneath her sheets and she looked fast asleep, having had a difficult night.

I decided to let her rest and got dressed silently for a solo drive. I could hear the camp slowly coming to life around me, although only our immediate neighbor tent was in sight through the vegetation.

By the time I reached the open camp gate, Tamboti had released its load of early game watchers in various directions, like as many drones, each programmed for a specific target. One party would go out seeking big cats, another would be birdwatching; some people are ecstatic at the simple sight of zebras or impalas, stopping at the very first sign of life; others are hardcore, demanding game watchers, and they live only for felines, ignoring or dismissing all other lifeforms.

I fit somewhere in between. I am interested by anything that moves, but seeing a new species is always a bonus. The discovery of a new color, the puzzle of a different behavior, a faster flight or slower approach make me wonder curiously. This carries me back through time and space to my days of underwater exploration, when the sea held so many mysteries that no two dives were ever the same. We would endlessly discuss the possible nature of the fish we had seen, our trusted Paul Humann ID books in hand. Nowadays my feet are dry and I have traded his books for the Sasol Birds of Southern Africa.

I turned north on the same section of road we had visited the previous night and very soon was rewarded with a new first-ever in the wild: a herd of giraffes grazing on both sides of the dirt road. I had hoped to see giraffes just as much as elephants, and was captivated. Giraffes are perfectly beautiful and completely bizarre. These stood so close I could see each individual marking on their back down to hair detail.

Once at the Vancouver zoo, visited for official purposes, I had hand-fed a giraffe from the top of a viewing platform and been saddened by the look of resignation on the animal’s face as it reached for my leaves and chew asymmetrically. I knew the resignation was probably in my head, but I had tried to imagine the beautiful animal in the wild. And here we were.

Further down, I met a solitary spotted hyena crossing the road as I exited a short dead-end to an old waterhole. The animal stopped and glanced over its shoulder with an attitude I could only describe as guilt. The hyena looked as though it was moving away from the scene of a crime it had just committed, but looking remorseful, or maybe fearful of reprisal.

I was back in camp around 8:00 AM and found the tent empty, Marie having gone to take a shower – yes, all SANParks have hot showers, as well as a cooking area and washing basins. Our braai’s ashes and garbage bin had been cleaned by the camp attendant already, as they would routinely be every day at dawn.

I brewed coffee while vervet monkeys moved noisily in the tree above me. Impalas were grazing across the dry river-bed, a few of them playfully jumping around as if their legs had been spring-mounted. A small brawl between two young males caused the defeated animal to slide off the steep shelf into the river-bed. It stood there for a moment, suddenly quite worried by its exposure and scanning for a threat that did not come. We had not seen a predator yet and it would actually be days before we did.

Olifants, our next camp where we had booked a rondavel-shaped bungalow, was about 100 km away. We took our time but decided to stay on the main road since the following day would be spent at the nearby Balule Camp and we would have the entire day to explore. We drove north for a few hours, stopping and going as we spotted animals.

With the best intentions, we would normally stop the engine in a place we deemed nonthreatening for the animals, and observe. But not all cars were as well behaved and when someone arrived behind or opposite us, traffic jams easily happened. Once, having spotted a herd of giraffes split up on both sides of the road, we stopped at a level that turned out to be exactly their crossing spot. A giraffe and many zebras gathered there hesitantly and waited for us to move. When we did not, they eventually moved forward a bit and crossed rapidly, the zebras launching into a nervous run.

At one point, Marie excitedly found a pearl spotted owlet hungrily eating a grasshopper. It was one of those intimate moments that many parks visitors would have missed or dismissed, and yet we later agreed that the little owl had been worth ten elephants.

We drove through extensive patches of burned vegetation, at times many kilometers of it, and wondered if the fires had been criminal, accidental or voluntary. Grass and low bushes burn quickly but trees, denser and kept ablaze by the heat, burn slower and their trunk turns to coal. When it’s all over and days have passed, their ashes form a striking white mound in the darkened landscape. We found such a tree, still standing but being consumed from the core, smoking lightly into the breeze as coals were burning deep into its trunk. It was a sad sight, controlled burn or not.

Soon after passing Satara, where we would eventually return, our progression was interrupted by a gigantic herd of buffaloes crossing the road. There were hundreds of them if not thousands, moving slowly but steadily, and rather peacefully. Our next encounter with the herd would be tenser. 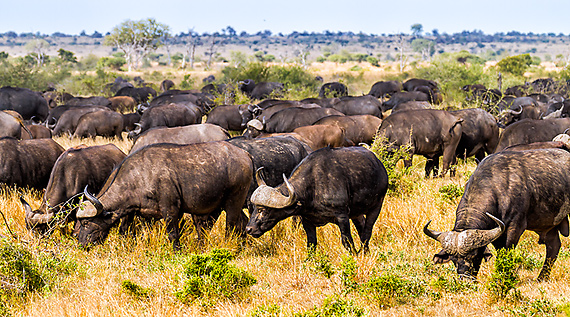 Towards the end of our drive, we reached the Olifants River above which our new camp was located. The Olifants is one of six main rivers in the park. It flows roughly west to east, meeting the Limpopo just before reaching the Indian Ocean. Having witnessed the Kgalagadi’s incredible dryness in summertime, I did not know what to expect in a wintertime Kruger, and sure could not have imagined what I found.

The river was gorgeous. Its width was commanding and flowed hard enough for little rapids to form in the fastest areas. A low cement bridge crossed from bank to bank, providing stunning, unobstructed views on both sides.

Getting out of one’s vehicle is forbidden in Kruger, with two exceptions: designated viewpoints or picnic areas – some of them guarded by an armed ranger and others probably chosen for their low risk factor – and bridges. People are allowed to stop on bridges as long as they are a certain distance away from an extremity. A line is painted on the road at both ends, marking a danger perimeter. I guess it is assumed that being between the lines puts one far enough from predators, with distance and space to see anything coming and react in a worse case scenario.

The captivating book Shaping Kruger that Marie was reading along the way recounts a story where people had gone on a night drive lead by a ranger. They had stopped on the bridge close to shore under tall trees and the ranger stepped away to light a cigarette, as he had done countless times before. Then he was gone. The tourists heard the metallic sound of his rifle hitting the ground, but nothing else, not a shout or grunt. A leopard had snatched him whole, probably snapping his neck, and dragged him up a tree to feast.

We got out near the middle and stretched. An unidentified smell floated through the wind and would follow us for days, a little musky, reminding me of stormy air, a mixture of electricity, moist soil, rain and plants revived. We never could quite figure out what it was.

The sound of the water flowing through such an extraordinary landscape was most memorable. I had not since the Orange river seen so much water inland. All the surrounding dryness seemed to suddenly mellow out.

In the distance, hippos in a pod were lying on the sand, looking like enormous blood-gorged ticks. A few huge crocodiles were also laying around, seemingly turned to stone but reminders of how quickly things could go wrong in the world at our feet.

A pod of hippos, like ticks on the beach

Then we drove slowly across the bridge, up and past a ridge on the opposite bank, climbed sharply back onto its northern side, and we arrived at the Olifants Camp.

The smell was even stronger there, an earthy, bizarre scent that had to come from a tree. We checked in and drove to our bungalow, and there our jaws just dropped.

The view from our porch was absolutely stunning, the camp being built up-high above the river which we could see for miles to the west, up to a tight bend where it disappeared towards the bridge we had crossed earlier. This was one of those places we could have stayed in forever.

We walked to the shop to buy charcoal and a few other things, and found another exceptional viewpoint with benches where the view stretched in both direction as well as straight down to the water.

Hippos were bathing or resting on the sand, far below us, and their grunts and bellows, echoing loudly above the constant white water noise, impressed us. They would be with us in multiple occasions through the trip and would become part of our daily routine, and a nightly anchor point, making us smile and sigh.

A herd of elephants appeared out of the trees far up-river and slowly crossed the sand bank to the water.

Back at the bungalow we were visited by many birds, tree squirrels and dwarf mongooses. An impala shyly walked by, inside the fence, having worked its way through the gate and probably unable to find the exit.

View from the camp rondavel

Birds were chirping as we prepared dinner through dusk. A fish eagle circled at our height and its unmistakable call, “the voice of Africa”, echoed melancholically. Down below, hippos grunted loudly as they grazed next to the wild river rushing to meet an ocean. It was a comforting symphony.

It was the song of the Olifants River.

You will notice, below, the new grid format for end-of-post thumbnails. As always, all pictures in the post can be clicked on for a full slideshow.