There is much that comes to mind when pondering Vancouver’s exceptional charm, but Stanley Park was, is and will remain in my heart the flagship of our city’s uniqueness.

I have written about it quite a lot and will keep doing so, but every once in a while, it’s fun to simply post a few silent ordinary pictures, snapshots and glimpses 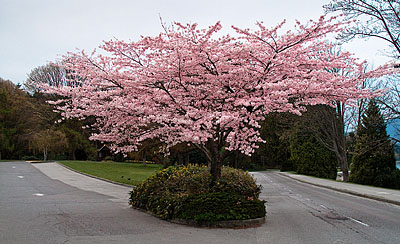 of a day now gone by, for the pleasure of sharing daily beauty with faraway eyes.

Spring arrived incredibly lazily this year and cherry blossoms are only now rising to full bloom.

The lady swan has moved back into last year’s nest right next to Lost Lagoon’s northern path and again this year, been protected by ugly plastic fencing and the watchful eye of volunteers. 7 eggs are in the nest and since it would seem the poor raccoons have been decimated by a specie-specific epidemic, there is good hope that all 7 will hatch.

A stone’s throw from the pond shores, warming up on rounded rocks in the timid sun, rows of turtles are seemingly contemplating the meaning of life.

And then, finally, I found the hiding place of all those starfish I had read about on another Vancouver blog. It’s simple, they are almost under the Lions Gate Bridge. Why there? I assume that’s the only place around the Seawall where depth increases significantly very close to shore, and also maybe the

only location with substantial current. This is the First Narrows and even though there is only a max of 60 feet in the middle of the waterway (which challenges large ships with a serious draft), the conditions must be well suited for starfish.

In any case, the secret is to be there at extremely low tide. The day I shot these I was running and could not stop for too long – and hence did not climb down to the waterline for close-ups – but I will some day soon. In the meantime, here are some shots of a hungry seagull preying on starfish. Man, these things must be chewy! I had to smile. I could almost hear it repeating in a nasal voice “Mine. Mine.”

So since I had my mp3 player and Vancouver is so literate, here’s my adaptation of the single-word language of Finding Nemo‘s seagulls, for Canadian birds this time:

The Sisters of Mercy – First and Last and Always 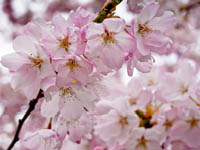 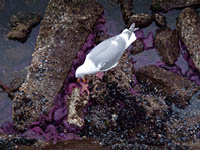