We live in a world of precision and ours is a life of numbers and data. Things have to be by-the-book, there are methods and guidelines for just about everything and formatting, more than ever, rules. The postal system as we know it, is no exception. It’s common knowledge that if one wants a letter to arrive, one follows very a strict recipe, arguably tinted by national habits but nevertheless rather rigid and border-proof. Name first. Title. Company. Apartment. Civic number. Street name. City. Postal Code. Country. Planet. Etc.

And then there’s Costa Rica. Believe it or not, until a couple of years ago, Costa Rica hadn’t yet embraced the otherwise worldwide convention of assigning to houses a street number and an address. Not even in most of the Capital San Jose – and I saw this with my own eyes, or rather I failed to see it because there were neither street names nor numbers! The result? One did not live at 123 SomeStreet but rather at SomeStreet, 30 meters West and 65 meters South of SomeAvenue. That’s right, they labeled their addresses with a reference – in distance – to a landmark!

Now it would seem that a reform is under way; the national postal service, Correos de Costa Rica, has ambitiously begun assigning alphanumeric addresses to the Capital’s houses and 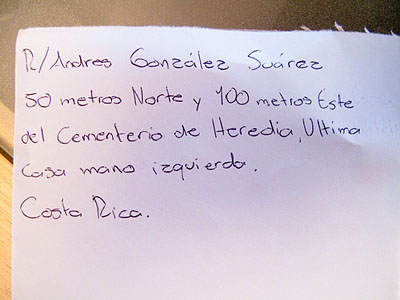 buildings. As a result, one now lives at something like Av8-Ca15-#15. Yeah, I can hear a few fingers scratching as many heads. It’s definitely not the easiest way to convert a country to progress. What the above really means is that you live on 8th Ave, 15 meters from the closest lowest intersection which is 15th Street… Gulp. I think the Switzerland of Central America has a long way to go…

Any way, this new system hasn’t reached the outskirts yet and the letter I received today from el muy estimado Señor Andres González Suárez, a Costarricense student in tourism very courageously asking me for a job, was labeled creatively without a postal code, but it’s the return address that poured sunshine in my day. I’ll translate for those of you who don’t espeaka’ eSpanish – bare with me, Don Estorbo:

Now is that poetic or what?

By the way, I don’t have a job for Andres but if you own a business in Canada and are willing to legally hire a Tico on a temporary work permit, drop him a note. Your letter might even reach him. The cemetery isn’t going anywhere soon.