Up at 5:00 am this morning, I decided to head out to work early and develop a few pictures while having a coffee at Waves on Richards (they boil filtered water and the NTU hasn’t climbed back up above 18/19 NTU over the week-end, which is good enough for me.)

I walked down to the bus stop in complete darkness; the streets were still wet from a night down poor and reflected the car’s headlights in this precious time of the day the Spanish call “la madrugada”. And there, waiting for my bus to come and sweep me downtown, I happened to glance up at the sky. Some low clouds were lazily lying on the North Shore Mountains.

But then, right ahead of me above the trees to the west, something caught my eye; a spec of light, then another, and then many more. The sky was full of stars! And even better, they were not just any stars, they were my friends; constellations I knew intimately for having gazed at them for hours, from all latitudes and longitudes.

The ones that had initially caught my attention were those of Orion the Hunter; the bright Rigel at his right foot, the red giant Betelgeuse at his left shoulder and Mintaka on his belt. To the south was Sirius in Canis Major, the big dog, brightest celestial object in the Earth’s sky. Above it was Procyon, of Orion’s smallest dog. Above it still were the Gemini, Castor and Pollux. Then to the right was the great rectangle of Auriga with its brightest star Capella. And below it, the V shaped head of the bull, Taurus, with a single eye marked by the red giant Aldebaran. And finally, even further to the north, the Pleiades, a faint cluster of stars called the 7 Sisters, whom Orion is said to be protecting from the bull with his two hunting dogs and his bow.

Through time and space, I was instantly transported across the ocean and landed far in the southwestern Pacific Ocean, on the upper deck of the ship where I first started putting names on all these distant worlds. I had bought a used celestial navigation 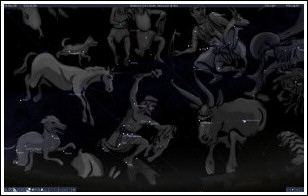 book in a dusty bookstore held by a French woman in Port Vila, Vanuatu; every time I could, I’d grab the book and go talk to the Filipino seaman on duty on the bridge, who knew the stars intimately. And slowly, they started talking to me too.

This morning at my bus stop, I must have shone as bright as the stars.

For those interested in the wonders of our sky, I highly recommend the wonderful open source planetarium Stellarium. Free and totally cool.