Some are probably wondering why on Earth I’m posting a picture of an old pair of running shoes… Well, it could be modern art. But in fact it’s sentimental.

My Asics GEL-Cumulus 9 running shoes finally gave up a few days ago. The left one had been causing me blisters for a couple of weeks. It had a tear near the sole that probably dated back to heavy trail running early this 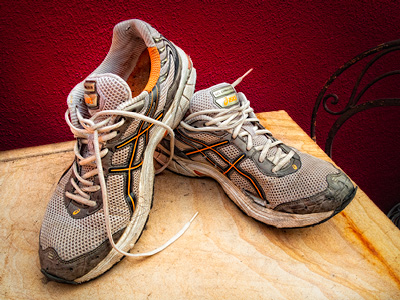 year in South Africa. It fought hard and then suddenly split open with a sigh. It’s a shoe’s life.

To put things in perspective, most experts recommend changing running shoes every 300 to 500 miles. Mine had been carrying me without a flinch for over 1000. Until a few weeks ago, they were absolutely comfortable. They had accompanied me on runs around Stanley Park on Vancouver’s Seawall, down the Seattle waterfront, across the Brooklyn Bridge and into Manhattan, along the beaches of New York’s Fire Island, to the top of Cape Town’s Table Mountain, up from the bottom of the Cape of Good Hope and many other wonderful places.

So I shed a tear for them, but it was time to switch. While my bad knee has been behaving impeccably thanks to the brace I now wear systematically, I had been battling neck and upper back pain and ended up seeing a chiro who said they could be due to running, and hence worn-out shoes. Running shoes tend to lose their cushioning and New York doesn’t offer much in terms of soft surfaces. I told him I loved running and intended to persist well into my old age. “What do you think about that?” I asked. “Well,” he said, “let me put it this way. You and I are going to become very good friends.”

So much for encouragements. But I’m still going to run. I’ll be careful, sometimes. My Christmas present is pair of Asics GEL-Nimbus 12, they should be here Tuesday. They are said to have the best neutral cushioning in the industry. Hopefully it’s true. I don’t mind being friends with my chiro. But I have very good friends that I only see once in a blue moon. It makes for much better stories…