But a small speck of harsh dwelling thinly spread over a few acres of dry Karoo space and theater to mostly survival, Prince Albert sits stoically in the shadow of the Swartberg range, isolated and remote. I would postulate that one does not end up in the small town by accident as it is defended by steep and treacherous mountain passes and an infinity of empty, inhospitable dusty land. Much determination must be needed to arrive here, and exponentially more of either fate or misery must be involved in staying.

The Swartberg’s geological past must have been violent. Part of the Cape Fold Belt, its highest peaks reach up two kilometers above sea level. The northern slopes, beyond which sits Prince Albert, actually drop first into a narrow valley running east-west along the main range. Like the mark of a giant prehistoric claw scratching the earth, the strange indentation allows for limited farming, collecting water from both escarpments and channeling it in a seasonal flow sufficient it seems to entice resilient agriculture. Beyond that to the north lays the semi-arid Great Karoo. 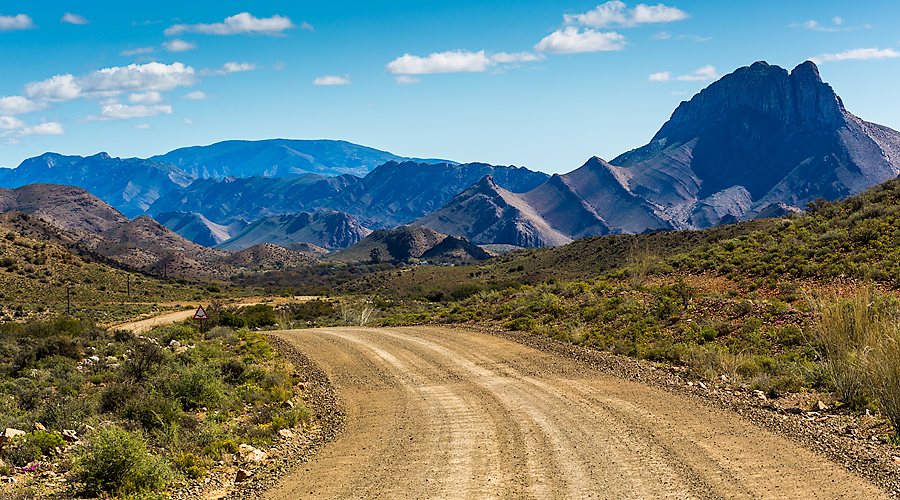 While modern days began when the Cape was colonized around the mid-sixteen hundreds, it wasn’t until the 19th century that roads were actually carved into the Karoo. The local tribes of Khoi and Bushmen began a slow but irremediable descent into oblivion and game was slowly replaced by sheep. Some nasty fighting took place between two white antagonist tribes selfishly pretending to control the land early in the 20th century, and then, while a fierce sun shone unflinchingly in deep blue skies and slowly fried people, stock and grass, the Karoo seemed to recede away from colonialist attention. There, not really out of reach nor out of sight but isolated nonetheless, it lay dormant again, covered this time not by ice but by heat, barely surviving on difficult sheep farming. Until recently.

From this blog’s War and Peace in the Karoo

Eyeing a couple of coffee shops with relief as they are an undeniable sign of civilization, we drive down the main street just above idle, stopping first at the local Spar to get valuables such as milk, butter and a few lemons. We then look for a butcher Marie found on the internet and which is supposed to have the best meat south of the boerewors curtain. Mogashagasha parked across the street under the weak shade of a scrawny tree, we walk into the small shop which is basically a long room cut in two by a closed counter – us and them, hunger and expectations on one side, blood and guts on the other. A jovial butcher addresses us in Afrikaans, and after Marie says hi and explains that “my man” doesn’t speak their language, he switches to a hesitant English, somehow managing to – either instinctively, cunningly or out of sheer luck – peg me as a Frenchman.

The hesitation is only linguistic, however, and his tongue is loose. We order lamb chops and boerewors and as Marie is carrying the wallet and handles payment – a blatant departure from rural life’s definite paternalistic habits – he launches into a long, convoluted story about a man paying drinks with his friend’s wallet. He laughs heartily at his own lines and we nod and smile appreciatively, having missed most of the twists and turns and definitely the punch line. Then, our precious braaiing supplies acquired, we jump back on the Landcruiser and, at the southern edge of town, opposite a small cemetery, we turn onto a dirt road that leads to our destination, twenty-five kilometers into the void.

Driving towards the farm

Tucked away from prying eyes, deep in the Karoo, the Weltevrede Fig Farm had been one of our few getaway contenders and I picked it because of its remoteness, after a careful aerial reckon on Google Maps which actually put it a good twenty clicks off its true position – but I was able to triangulate true coordinates by comparing the striking background mountains from their website pictures with a Google 3D view. The farm rents out a few cottages and we have picked the one that sounded the most isolated, and had the most promising views, Fonteinskop. That choice was a compromise. While all other accommodation on the farm are old, original houses, ours will be a recently-built mansion. But open space and vistas, we figure, are worth more than old walls and authenticity. We will not be disappointed.

Pretty, empty and dry as an old piece of biltong, the road leaves the Karoo plateau, hops over the first shoulder of the valley and slices its way west through decidedly dry and rocky scenery. After some thirty minutes, having passed only a couple of remote semblance of human presence, we arrive at the farm and turn off the main path to the left, in a suddenly greener valley filled with fig trees. Milk, at Weltevrede, runs as sap from the trees rather than liquid gold from the cows.

A cat walks along a pretty water patch and very hairy chickens greet us out of the car. Dogs bark, a normal sound on a South African farm. Our hostess welcomes us in, a baby on her hip, and gives us the friendly and down-to-earth welcome speech. She summarizes the farm’s origins, something about families, mariage and inheritance, and then comes to the house we are renting. It is far up on a long monticule of rock. She explains they wanted to do something different; it’s easy to build a bunch of small houses to fit several families, but they wanted it to be special. So they worked really hard bringing the stone slabs up the hill, fitting them by hand, and the couch is custom made. 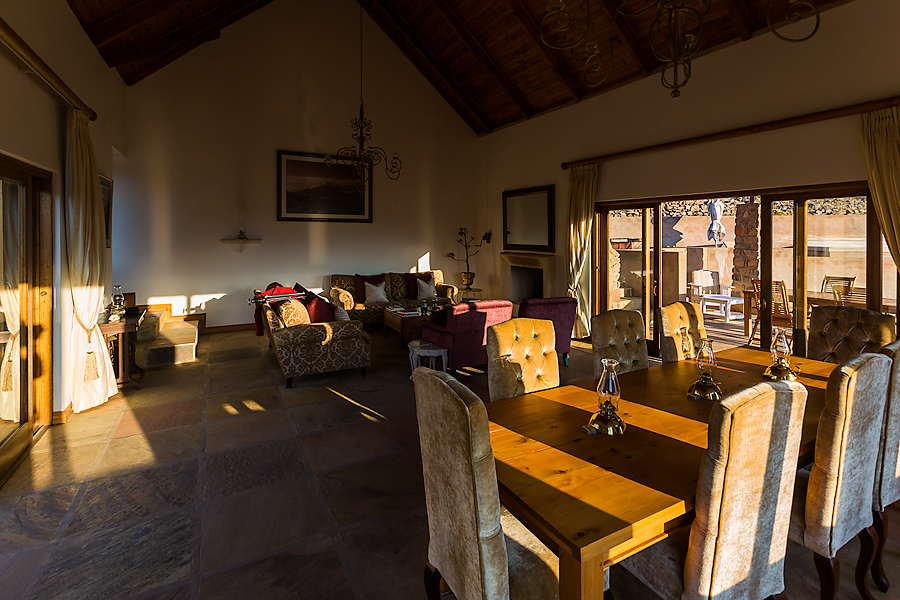 Royal furnishings in the desert

Directions are simple. Back out of the farm, keep going for about three kilometers and you’ll see a gate on your right. The road ends just a few hundred meters further any way. Make sure to lock the gate when you are in, it’s for the animals.

It so happens the farmer decided to turn his last and newest rental house into a mini game farm. He has fenced a perimeter and brought in a zebra, kudu and… giraffes! We are not sure how we feel about this since while mountain zebra and kudu are definitely native, giraffes probably never lived this far south.

He shows up as we are about to head out. Asking customarily about leopards, we are told they stay up in the mountains. He also explains to me, since the man must obviously be the driver, that the last section up to the house is four-wheel-drive only. “Just put it in low gear,” he says, “and you will be fine.” 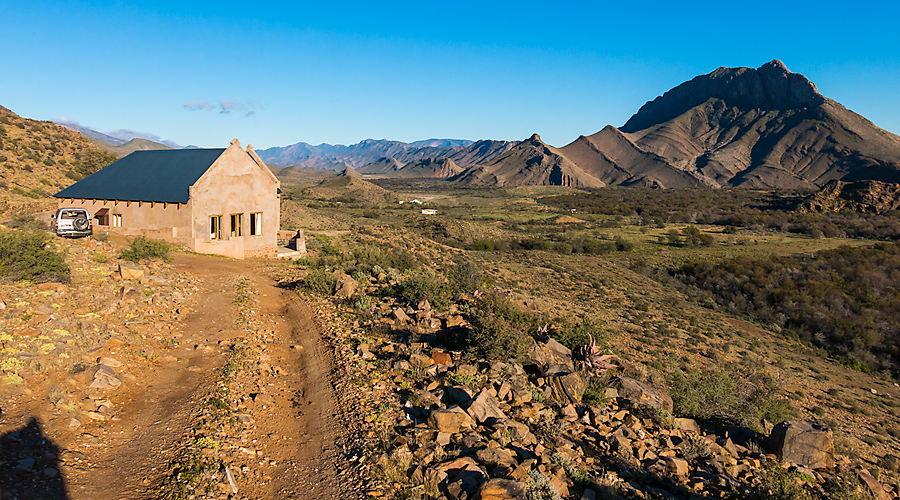 At the top of the monticule near the cottage

We are handed the keys, which I take with two fingers, and we proceed down the road slowly. The gate found and passed, we drive through a very narrow gap between two rocky escarpments, barely clearing jagged stones on both sides, and come to the steep section. The house has been built atop a stony promontory and the farmers have not exaggerated the slope’s gradient. With fond thoughts of our adventures on Lesotho’s Sani Pass and further Drakensberg passes, I shift the Landcruiser to low gear, locking the differential, and work my way up slowly, careful not to scratch the paint hillside or step over the edge dropside.

Having seen pictures of the mansion in advance, we are not taken aback by its strange modern style. But it is even more spacious than we had expected, and the view is, as hoped, breathtaking. We unpack and explore. There is a braai of course, plenty of fire wood, a small basin serving as a pool in warmer months, a local lizard enjoying the afternoon, enough space for a family of ten (even though, strangely, sleeping space is limited to four) and a large fully-equipped kitchen with two sinks, an island, six-burner gas stove and espresso maker.

At last, sipping thoughtfully on a ritual G&T on the terrace, we take the accompanying deep breath associated with having finally arrived to the legendary middle of nowhere. Our eyes and imaginations drift into the landscape. Down there in the distance along the valley floor, two small houses appear deserted, probably within the nature reserve that begins just outside the farm and is not accessible without a permit.

Suddenly, there is movement below us. Our jaws gap as a giraffe slowly walks out of the thick bush, a few hundred feet away, then another, and a third, and a fourth. And then a zebra. The latter is hilarious, following the giraffes everywhere and rubbing against them, either believing he is one of them, or will find a mate. I don’t think he has noticed the height difference.

I struggle to reconcile the oddity of this location with the pleasure of watching animals in a wild that really isn’t. Their kingdom is about one hundred and twenty-five acres of dense bush and grass clearings. They spend lots of time eating tiny plants off the ground and we wonder if they are running out of suitable trees to pick from. Then I just ponder their existence. They must know that noisy bipeds will regularly burst the fenced bubble to come and make fire while staring from above, surrounding them with horrible smells of cigarette, petrol and mosquito repellent, not to mention charred meat. But do the giraffes even know they are captive? 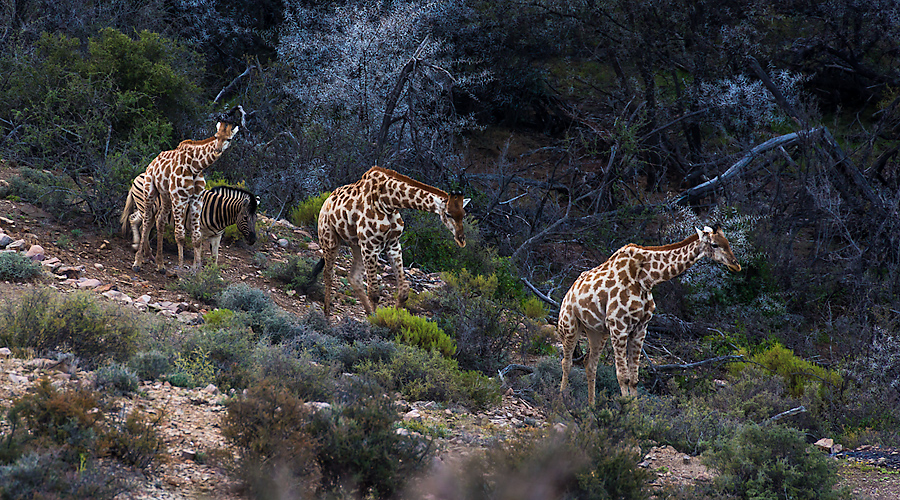 This is spring in Southern Africa and desert nights are chilly. By sunset, a sweater is welcome and both land and sky erupt in warm tones and striking contrasts that, while more subdued, remind me of Vancouver evenings.

As the light dims outside and shadows close in, we prepare for our first night. The place has running water through a well and a pump. Hot water, the fridge and the stove depend on gas, but there is no electricity. Dozens of candles have been conveniently spread out throughout the rooms and they are lit solemnly. Six or seven solar-powered led lamps mounted on the lid of glass jars, a typically South African-made lamp we use even in Brooklyn, are hung in a rectangle above the kitchen island, making for a well-lit space and lasting long enough to cover supper and later dish-washing.

Having chosen to eat on the veranda that evening, we are joined by billions of stars escorting a full moon and in the end, darkness never wins.

There will later be pictures of stunningly purple striated mountains and multi-colored constellations, but for now enjoy the light!