A hummingbird pays us an unlikely visit in the City of cities
Fauna, New York, Photoblogs

When I came home last night after running back from work, I rang the buzzer but got no answer. Surprised, I let myself in and found the apartment deserted.

Assuming Marie would be on the terrace and torn between a childish desire to surprise her loudly and a more mature impulse to respect peace and harmony, I walked through in silence, our old wooden floors creaking as I advanced, and peeking through the bedroom door I found Marie standing on the terrace camera in hand, still as a statue and looking up like a Sioux watching a buzzard circle high in the sky above the kill it would eventually feed on.

“There’s a hummingbird!” she hissed. I froze. There is only one prior occasion that readers familiar with this blog will be able to relate to in order to understand her tone. It was a famous leopard sighting in the Kgalagadi Transfrontier Park. We had been far from home, pushing the boundaries of our comfort zone.

But this was here. It was home and comfort was all around. The bird was just a stranger. On its his way from A to B, chasing the seasons, always a nomad. 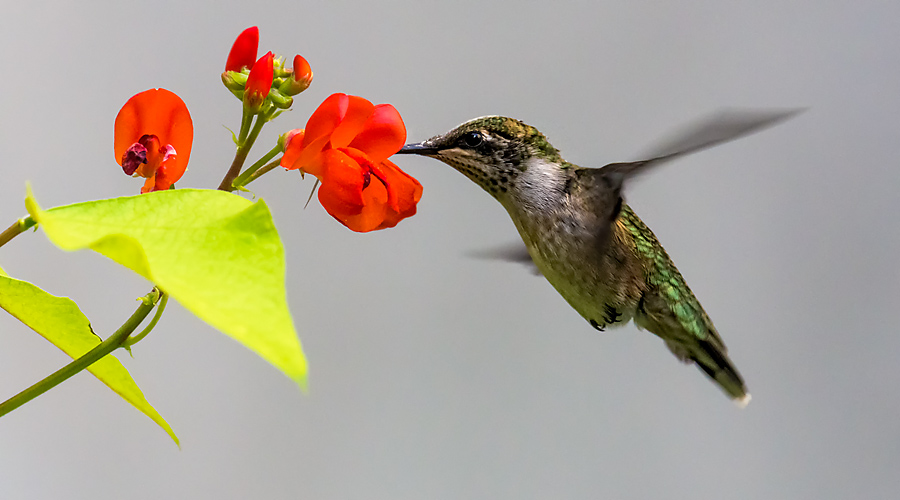 I silently retreated and fetched a camera as quickly as I could. The kit I ended up grabbing was my 6D with the EF 70-300mm f/4-5.6L IS. Then I went back and grabbed the 1.4x teleconverter. I hurriedly dialed in 6400 ISO since my maximum is normally set to 3200, and hoped this would do.

It was late afternoon – around 6 PM – and while some sunlight still reached the top of nearby buildings, the terrace was already slowly sinking into soft shadows. I didn’t have much to work with and most shots came out a bit blurry. The 6D actually shines in low light, so to speak, and its high ISO performance is stellar, as you will notice. But the weakness is its autofocus system. This is definitely not an action camera and my only options were to choose a single central focus point, impractical due to the speed at which hummingbirds move around the frame, and a full array of points, which I picked – and risked focusing on the nearby flowers rather than the bird itself.

Still, a few of the pictures came out very well, the hummingbird having conveniently decided to hover in front of the white wall turned gray by a precocious evening. Now please keep in mind that my shutter speed on these was 1/640th of a second. And, yes, the wings are still blurry! Think about that. This is a bird, not an insect, and while rather small for a bird, it still flaps its wings so fast that my sensor could not record them sharply with an exposure more than 600 times shorter than a second. I wonder how nature manages such energy requirements…

The adorable creature paid us a few visits, staying just long enough for the camera to wake up, and disappearing again over the edge in the blink of an eye. Marie’s own eyes were actually filled with tears, the happy kind.

That hummingbird made the terrace all the sweeter and Harlem, just a bit less humming.