In the Lions Den

Hiking up North Vancouver's Lions in the snow
On the road, Photoblogs, Vancouver

When I got up at 6:00 am, I rushed out of the house to look north at the mountains. The sky was blue above me but a layer of low clouds topped the entire Coast Mountains and the Lions were nowhere to be seen. Qu’à cela ne tienne. The forecast was calling for an afternoon clearing and I decided to have faith.

The trail to the Lions starts in the little town of Lions Bay, just north of West Vancouver’s Horseshoe Bay. I hopped on a bus, then a second, and a third and by 8:45 am, the C12 Community Shuttle was dropping me off at its last stop off Highway 99.

I started up the steeply climbing streets at a brisk pace, following directions I had found on the internet to get to the trailhead. People were watering the lawn of very fancy houses and saluting me as I walked by, wishing me a pleasant hike.

I had my hiking boots on and the bright orange pants that have accompanied me on so many great mountains. At 9:05 I was at the trailhead and left behind a couple of gentlemen by their car, obviously getting ready for the trail too.

Adjusting my backpack, I strapped on the waist band, pulled the shoulders in closer to me and unfolded my ski pole. I had reset the Suunto Vector to sea level and started a differential altitude measurement.

The first part of the Lions trail winds through a thick forest on an old logging road. The canopy is dense and the sun rarely shines through the trees.

After an hour, I reached the fork to Mt. Harvey, took a right and pressed on. I crossed Harvey Creek and, having left the logging road behind, I followed the steep and rugged trail at a slightly slower pace, trying to keep the rhythm up scrambling over fallen trees and loose rocks.

At one point, wondering why water was dripping from the tip of my hat, I looked through the foliage and realized I had reached cloud level and was now climbing out of sight from the world below.

The trail became difficult, ascending straight up the mountain forest and then around 1100 m., the snow appeared.

At first in small patches, it soon covered most of the ground even though I was still under the blanket of trees. The trail became invisible and I had to rely on scarce orange tree markers. The snow was hard enough that I could climb without sinking in and yet had no need for carving my steps.

But climbing in snow is a slow and energy-demanding process. When I finally reached a clearing in the trees and emerged on a narrow ridge, I was quite ready for a break. I had been walking for 2 ½ hours and looked up expectantly, hoping I was approaching my goal. But to my dismay, the West Lion was still towering above me, surrounded by menacing clouds that came and went, opening and closing windows in the sky.

From my location to the foot of the rocky cliff, an immense snow field planted with a few rare trees looked rather inhospitable. The slope was very steep and lead straight to the rocks where I had no hope of ever climbing up.

I assumed the trail would have gone to the right cutting through the snow slope at an angle and away from the ridge, and so I did too, heading up slowly and pacing myself for the first time. I didn’t want to give up so close to the finish line.

I really wished I had crampons but as long as I tested each step, I progressed without much trouble. It wasn’t late enough for the snow to have started softening up too much and I followed old crampon tracks probably left a few days earlier.

A half hour into the snow field, I approached the real crest where the Howe Sound Trail winds its way from Cypress Bowl.

The slope grew almost vertical and I finally had to dig my frontal steps into the hard snow, taping back into almost forgotten habits from some 25 years ago… At that stage, the climb becomes rhythmic, almost hypnotic: right foot up not too high, one, two, three kicks, it holds on the third. Left foot up, one, two, three. Then the now short ski pole in the right hand goes up. Then right foot. Left foot. Pole.

How I admired Everest climbers, right there and then, as I struggled through my 1500 m. at just above the speed they achieve almost 6 times higher on the Earth’s tallest peak.

And then I was on the ridge. Empty space on both sides, filled with white and grey clouds. To the left, it went up to the Lions. I turned left.

The edge of the ridge was actually dangerous, a real overhanging snow cornice on which you wouldn’t want to walk unless you had a thing for free fall.

So I stayed away from the edge and went as far as the base of the West Lion. Climbing the remaining 100 m. or so of the Lion itself supposedly has got more to do with rock-climbing than hiking and even though there are reports of a fixed rope on the Eastern side of the tower, it is very loose rock up there and I was in no shape to attempt it.

So I unpacked my lunch and ate. The clouds were moving fast and I could see around me periodically, catching glimpses of the two Lions, Unnecessary Mountain to the south and even Lions Bay below. But the breaks were short lived and by the time I got the camera out, the white shroud had closed up on me again. Vancouver remained out of sight.

I then made the only wise decision that remained: I took a nap. It’ll clear up, I figured. So I lied down on a flat rock, snowy ridge to my right and rocky edge to my left, rested my head on the pack and fell sound asleep.

When I woke up, the first sensation was one of intense heat. I opened an eye and closed it right back, blinded by bright sunshine. A glance at my watch: 13:30. I had slept for an hour. I sat up and looked around, astonished.

This was a new day. The clouds had vanished from the area, receding to a distant horizon east of me, way beyond Seymour Mountain. Around me was blue sky and I could see all of Howe Sound and the mountains surrounding me. And Vancouver!

I jumped to my feet, grabbed the camera and ran to the rocks below me to shoot the Vancouver scene. Then I turned around and started up the ridge, still running, to go take pictures of the Lions from a better point of view 50 feet above me. But I had to stop half way up because after climbing into snow for a moment, I realized I should probably go back and put my boots on.

By then my socks were soaked and the two hikers from earlier arrived at my level; they must have thought I was crazy, running around in my socks like an excited kid. They said hi and commented on how nice a day this was; they must have taken it for granted. They were an hour and a half late and hadn’t even noticed the clouds. Oh well. Some things are better left unexplained.

So as they were taking pocession of the ridge and beginning the picture taking process themselves, I put my shoes on, finished my own session, packed up my things – making sure I left no garbage behind – and headed down.

It was 14:10. I was worried about catching the 16:40 bus back to Horseshoe Bay. I have bad knees and descent is not my strongest asset. The snow field was easily negotiated: a sliding run, never straight downhill but angling left and right, where each gliding steps covers 3 or 4 feet of controlled out-of-controlness into now melting snow.

Then into the trees. I lost the orange markers for a while but I knew I’d find them sooner or later, besides I had the GPS turned on and tracking in the backpack and a topo map in my pocket, printed from the internet.

By the disappearance of the snow, my knees were complaining. When I connected with the trail heading towards Harvey Creek, they were plain mad at me, and my toes started 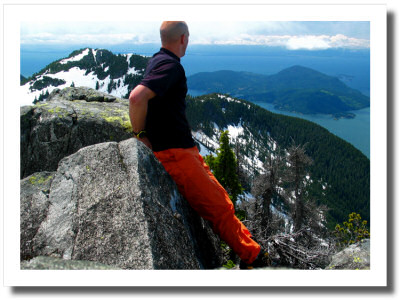 some complaining of their own.

I’m an adult. My feet cannot still be growing. So how could hiking boots bought 6 years ago have become too small? And yes, I did a descent test before buying them at La Cordée in Montreal, on my way to the Alps.

In any case, by the time I hit the logging road, I was going slower on my way down than I had been on my way up. Between the knees and the toes, I walked like a crippled old fool and was very glad nobody was around to see me.

I swore every bad word I knew in French, then Spanish, then English, and arrived at the bus stop at 16:32.

The bus showed up a few minutes later and I struggled through my pockets to find the loonie I needed for the extra zone fare in addition to my monthly pass. Couldn’t find it. It must have been lying somewhere on the snow field.

“Are you looking for a loonie?” the driver asked.
“Yeah, I replied, I just came from…”
“Don’t worry about it, hop on!” he said.

Great hike, some pain, 6 hours plus a nap. I’ll do it again, later in the summer. In the meantime, stay tuned for Part 2, the stuff I started writing at the top, high on rich expedition food, Gatorade, amazing views and fresh air.

Oh yeah, a loonie is what we call our one dollar coin. ;-) 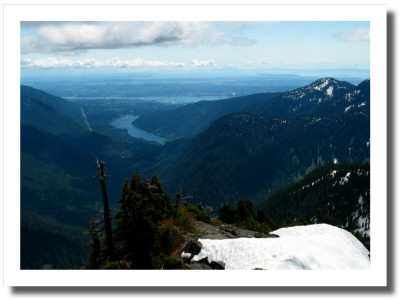