Full circle through the years; we spend our last night in the park where the Lesotho trip had started.
Kruger Trip, Stories

Leaving the milk farm behind, we joined N1 and steered due south. Driving through Bloemfontein in daytime again, we did not see much more than we had before.

Eventually, dry agricultural lands turned into plain dryness and the northern boundary of the Karoo was crossed at the Orange River. Marie and I took turns driving and when sitting in the left seat, we took snapshots through a briefly lowered window. There was construction now and then slowing us greatly, the average waiting time at any given checkpoint being 10 to 15 minutes. But to be honest, the N1 was overall nothing but spectacular. 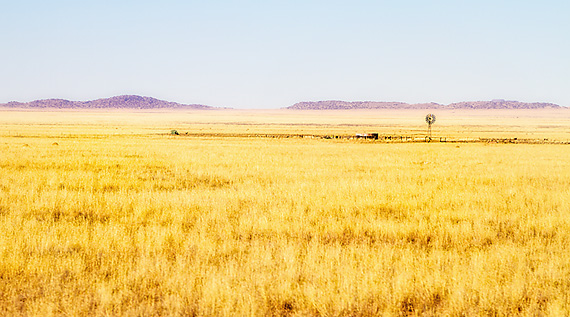 A word of caution about the pictures in this post. These images might not be fine art, but they are not Instagram either. They reflect a reality whose surface was skipped over, like a flat stone, water: quickly, superficially, but finally sinking into the very mesh of that reality. They ought to feature my face, painted in the window I sometimes did not even have the luxury or time to lower, a reflection of reflection itself, my expression plain but thoughtful as I stared at the immensity of poverty and the richness of empty space.

One day, some day, this will all catch up with us. It could be that this barren landscape it becomes our home. It might turn into a new playground. It should always be respected and revered. It is Africa. A troubled land of heat and great emptiness, and pockets of even greater human trouble, nature filled by the needs and desires of mankind, attempts at civilization, failing mostly because Newton’s laws are flawed. To each action does not correspond an equal and opposite reaction. The hungry mouth that seeks food does not cause an equal and opposite reaction of nature that sends food its way. At best, the action will result in the theft of food from another mouth, which will then go on to steal it elsewhere.  So to each action corresponds an equal and compounding action. At worst, the action results in death, and we can then re-visit the concept of nothing lost, nothing gained, which is probably proven wrong in Africa.

We stopped once more in Three Sisters, at the Travalia farm stall, and stocked up on meat, boerewors and lamb. Some of it would be kept on ice and brought back to Cape Town, but we also needed to braai one last time in the Karoo National Park. The stall’s water-piece, a fountain that defied the dryness of the surrounding veld with disdain – and a few fish – was as out of place as the trout fishing pond of the Du Toit Kloof Pass had been on the way up. 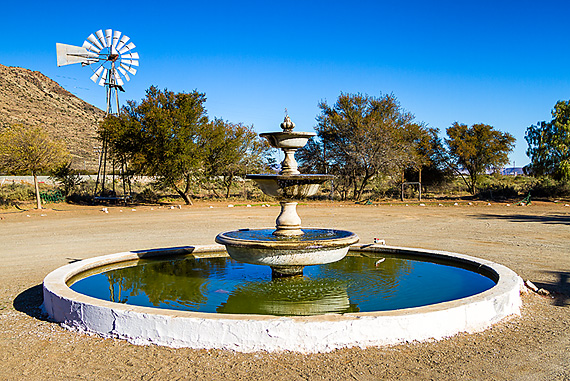 Just beore reaching the park, we crossed the small town of Beaufort West with mixed feelings. We had been pulled over by the local police during our 2009 Lesotho trip and had remained a little biased, even though the outcome of the license plate crisis causing it had been quite good. The small town was identical to what it had been. An old Christmas decoration was falling apart over the main street. This was June. Snow was actually on the highest peaks of the nearby mountain ranges, but as far as Santa Klaus was concerned, this was still the antipodes.

The park entrance was right outside of town, a couple of kilometers down the N1. We were admitted in after showing proof of our reservation and surrendering our license plate numbers and agreement that whatever They decided, They would be right about it. Such are written agreements, but we happen to like SANParks, it makes signing easier.

It was, once again, late afternoon. The sun was dripping over the mountains, a careless painter leaving many slopes and eastern faces drowned in blue-ish shadows. I briefly got out of the car to take a few pictures, aware of my breach of protocol as the Karoo National Park had since our last visit introduced lions back to the wild, and I probably should not have ventured out of the Landcruiser. But then we passed another gate, automated and cattle-grid equipped, and we knew we had crossed into official lion territory. The inner fence surrounding that secondary perimeter was odd, electrified and slanted.

We drove to the reception desk, parked where we had before, and walked in. A SANParks employee behind the counter was dealing with a pale-skinned, younger customer. As we were waiting, he asked rather bluntly where the rhinos where. The lady behind the desk looked at him dismissively and said: “I can’t tell you that!” We smiled inwardly. Having just come from the Kruger’s mega-poaching Mecca, we had to sympathize with her. What if he actually had been a bad guy? 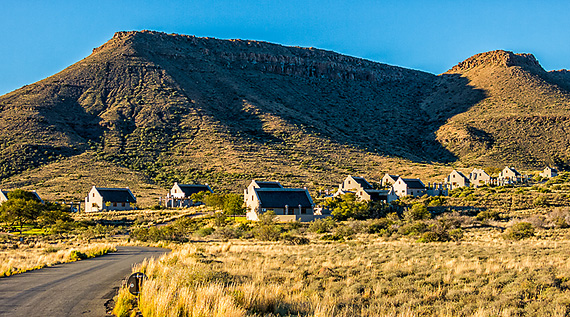 Claiming our bungalow keys, we inquired about breakfast and then Marie walked uphill to our place while I drove the Landcruiser a few hundred feet. The room was stunningly big and bright. Facing west, it was lit by sunset and the view was nothing but fynbos and mountains. Just beyond the nearby fence, somewhere, were the newly introduced lions. The area were I had once stalked zebras against an amazing rainbow was now off-limits. I guess the zebras weren’t too happy about that.

I chatted for a moment with our neighbors who said the nights were cold. They had been there the previous year during a record snow fall that had locked them inside the park, as all roads were blocked and access cut-off. They were already braaing in the built-in fireplace and soon, we did the same, with fresh meat bought in Three Sisters.

We lit up candles and ate hungrily on our patio, tucked against the fireplace to fight off the evening chill. Stars appeared one by one and shone icily as a cold darkness fell on the Karoo. Then somewhere down towards the bottom of the valley, closer to where we had camped years before, a lion roar echoed in the silent night.

We looked at each other. We had gone so far seeking the very goosebumps such a primal sound will give you, and here we were, almost full circle, a step away from home, and Africa was thanking us for our patience, and our respect.

Through the voice of a lion on a cold night, crystallizing our trip and the many prior journeys, she was chanting:

“I am wilderness. I am nature. I am hot. I am chilly. I am hostile.  I am struggle. I am hunger. I am beautiful.

I am at the source of what came first. I am troubled, and ever-suffering. I seem to drive men crazy. I am so diverse, I am it all. Look around you and you will be touched. Peer deep into me and you will see yourself. You will be humbled and you will be hurt. You will feel like I must be protected from myself like a kitten unaware of the world’s dangers.

Every minute you spend with me will be spent bleeding. In my litter you will witness pure evil and sheer greatness – same mother, different fathers.

Under my spell you might grow and learn about the world, and about yourself. You could even become selfless. You might, then, have a chance at becoming a better being.

Hello, I am your mirror. I am Africa.”