Slingshot to Kruger, Part 12 – Honing in on Kaapstad

La boucle est bouclée, we end a 5,000 km road trip to the Kruger and back
Kruger Trip, On the road, Stories

The lions roared again at dawn as we were packing up in the Karoo National Park.

Breakfast was included in our stay and served in the main restaurant, right behind the reception desk. Full English was the word and I daringly ordered lamb kidneys, which turned out to be butchered, pardon the pun.

We ate quickly as the room filled up with semi-serious gamer watchers. These were the people who needed coffee and toast before driving out in search of wildlife. They would get the left-overs, better than nothing but no longer prime sightings. The hardcore, as always, had long departed our camp and were already scouting remote locations and stalking their photographic prey.

Leaving the camp with a sigh, we detoured towards the edge of town to fuel up. The Landcruiser heavy and content, we hopped back on good old N1 and steered south. The Nuweveld escarpment eventually disintegrated into Karoo emptiness over our right shoulder and we ventured into dryness.

As always when going home, miles seemed to tick slower than when the goal lay forward. Our mission was to arrive without hiccups and we stopped only when absolutely necessary, taking pictures in motion, right and left, and far ahead. Taking pictures while driving is like shooting from the hip for cowboys and cops; very cool, much quicker, but accuracy takes a hit.  So be it. The newly paved road stretched into arid and washed-out land where it met the sky. Even from a car, our horizon was steady as the universe itself. 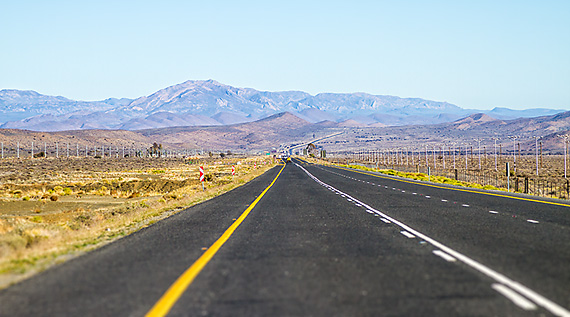 Marie and I spoke little, lost in thoughts, taking comfort in each other’s presence but unwilling to breach the silence for small talk. Our inner eye was still turned backward, watching the Kruger unfold around it. Our hearts felt a mix of sadness for leaving the wilderness behind and joy for the promise of Constantia’s solid shelter. Homecoming, no matter how wild the ride has been, despite the glory of discovery and the treasures left behind, is probably the sweetest feeling to a human mind and heart.

After relentless emptiness and hours of flat, unforgiving vastness, the mountains of the Cape Fold Belt appeared once again on the horizon. We had received reports of more snow on the peaks and were looking forward to our crossing of the belt. Like Hannibal through the Alps, we would plow our way across a mountain range and conquer the other side.

Soon snow was indeed covering the mountains that lay against us. We followed our previous tracks through the Hex River Valley, allowing ourselves the brief luxury of a very slight detour on a small road parallel to the main. Vineyards were brightly colored and contrasting starkly with the snowy heights.

We hopped over the range, continued into the vast plains that extend to the next barrier, the Hottentot’s Holland mountains, a last shield of stone to be crossed through a dark tunnel. Unlike Bilbo, however, we did not have to fumble. The underground way was well lit and our GPS, ironically out of a signal, kept tracking our progress by dead reckoning. The light soon reappeared, and not long after it the ocean too, and the climate tempered itself.

We were back. Cape Town was surprisingly hazy and we had to smile at how tolerant we were of the smog here compared to what it had been up around Johannesburg. We eased our way past the Flats, climbed into the foothills of Table Mountain, wound our way onto Rhodes Drive, into Constantia and arrived home.

After letting the engine idle a few minutes as always after a long, high speed drive, the ignition key was turned anticlockwise and as the silence settled in, we took a deep breath and patted the Landcruiser’s dashboard. “Good car,” I whispered, “gooood car.” We had just driven over 3,000 km on a timing belt that had to be changed “immediately”.

Silence didn’t last long. The front door opened, two exuberant corgis were released and the festivities began. We always get the best welcome home. As if we had been away for centuries. They might be low on their legs but their enthusiasm is high, and so is their affection.

We unpacked the Landcruiser hastily, dispatching mountains of gear throughout the house, the garden and the two garages. Then the hose came out and mogashagasha was given a first wash, naked in the front of the house, at the bottom of a very quiet residential cul-de-sac.

Nobody watched, though, other than maybe a couple of hadedas and a chameleon I have not yet found. Like a child torn between the fun of the spray and a growing sense of self-awareness, the brave car stood there and as the mud and dust dripped from her flanks and she began to shine, she seemed to be taking a deep breath.

We looked at the Landcruiser affectionately. Apart from a momentary hiccup in the Kruger which we might never explain, it’s taken us so far on close to 15,000 kilometers of open road and desolation, a good third of which were unpaved – from the searing heat of Namibia to the frost of a Bloemfontein night, from the salty sea level of the southern tip of Africa to the peaks of the Mountain Kingdom of Lesotho, through dust, sand, mud, floods and moods, bravely, evenly and ever so powerfully.

It’s funny how one grows fond of machines. Vehicles, particularly, seem to help us widen our horizon, push our limits and test our resolve. They become an essential part of the journey, taking on a personality of their own and reflecting ours. As a race, we would be nothing but a bunch of rats in a cave if we had not invented, and loved, our transportation machines.

Well, we might still be rats, but the rats have grown and learned about the world and themselves as they rode, sailed, drove and flew to places once forbidden. I wish I could now, casually, pick up the phone – or Skype – Lindbergh and ask him about the Spirit of St. Louis. Or Cousteau about the Calypso. Or, why not, Armstrong about an incredible rocket named Apollo 11. What an interview it would be! The stories they would have to tell!

I think that this is the very reason why Marie and I, every once in a while, with the generosity of others, seize the chance of escaping the comfort of routine and drive a valiant Toyota Landcruiser towards places whose discovery will shift our vision of the world and make us ponder what lies even further than we can see.

It’s because the moment our hands land on that wheel, a bond is created. I think Cameron called it “Tsaheylu” in Avatar. Human and beast feel like one.

And then it wants to drink diesel.