It’s raining in Vancouver. The sky is overcast and dark in all directions but the south, 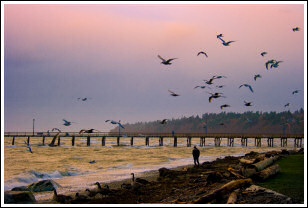 where a little light and a hint of blue sky shine through the madness. So I hop on a bus and go as far south as Canada will let me. Along the way, the wind picks up and road signs begin a wild dance in the chilly air. When I get off the bus a few kilometers from the border, over an hour later, the rain has stopped momentarily but the sky is moving past me towards the north at a tremendous speed, as if late for a spectacular collision with the Coast Mountains. I head down the hill to the beachfront of White Rock, catching my first glimpse of the shoreline and getting my hopes confirmed: white caps as far as the eye can see and wide surf all along the coast. Sea and sky are having a fight, competing in a display of fury and darkness. The camera comes out of the bag. 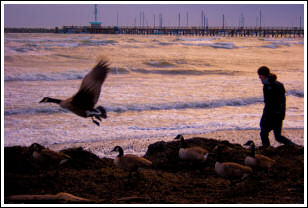 My tripod, however, stays put. It is too flimsy and won’t be of any help in the 60+ km/h gusts. I’ll just have to boost the ISO and keep the shutter speed as high as possible, grainy look or not. Neither bracketing nor HDR today. A few people are attempting to surf, watched by a flock of Canadian Geese resting on the beach, obviously thinking that if they find it wiser not to be flying in this weather, humans should consider making the same choices about their swimming. People are walking around head down and eyes half closed as rain drops suddenly turn into hurtful pellets. I spend most of my time with my back to the wind, protecting the camera the best I can and having a hard time keeping it dry and the lens clean. Going from a shelter to the next, I shoot, hide, dry the lens,

and shoot again, happy as could be. The break in the clouds soon closes back up and the rain becomes more insistent. Final darkness falls on the little town and I finish taking a few shots of the surf illuminated by Christmas lights, having mounted the camera on the tripod and using it as a monopod, leaning it against a handrail and pushing on it with all my weight to try and steady the shot. Then I bail out of the night, catch a shuttle to the main bus stop and wait under a porch while small hail pounds the streets. When the bus finally arrives, I settle into my seat and letting warmth slowly come back to me, I turn my music on and slip into a daze.