South of all things African, there remains only ocean
Hydrosphere, Photoblogs, South Africa

For our most recent yearly trip to South Africa, I could only afford two weeks away from work. We decided to invest four days on a short road trip, a mini-adventure, to grieve, empty our minds and recharge mostly depleted batteries. The target was a minuscule place called De Mond Nature Reserve, on the eastern flank of Cape Agulhas, southernmost tip of the African continent.

We had visited Agulhas three years earlier and if you are curious about the geographical and historical details of the cape, you should read that post too. Cape Agulhas is the actual southern tip of the African continent, despite its relative absence from popular culture where it is often replaced by the Cape of Good Hope. Much closer to Cape Town, the latter has served as a familiar stumping ground and we return often, through heat, chill, rain, flower season, after-fire dryness and the fiercest winds. 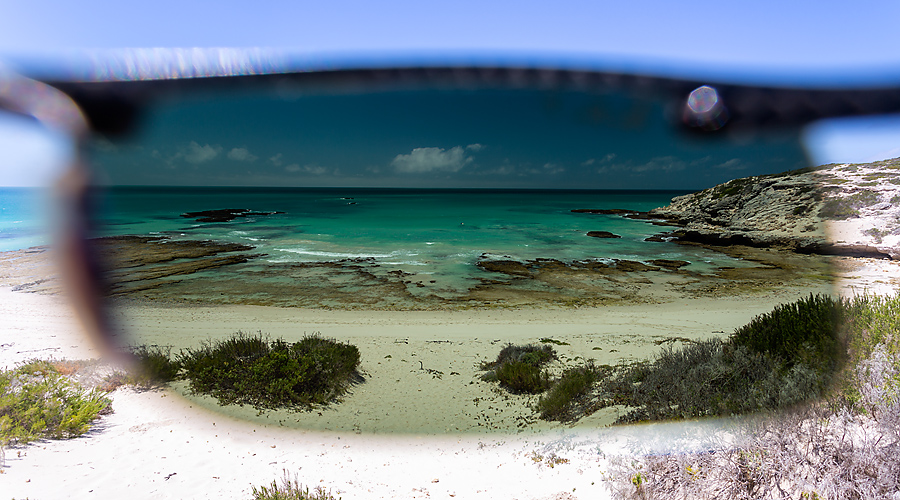 Improvising in the absence of a polarizing filter

Agulhas, on the other hand, is more of a stretch. From Cape Town, it is a good three-hour drive if one sticks to the main roads. If wandering off to smaller paths, though, one might never arrive at destination, for in scenic South Africa plentiful distractions await the inquisitive mind. But the main route is rather straightforward. From Constantia, we dashed through the Cape Flats, Khayelitsha, Somerset West and hopped over Sir Lowry’s Pass, squeezing our way through the Hottentos-Holland range and passing Grabow, home to my favorite boerewors style.

Beyond the mountains, we ignored the turnout to Stanford and steered to the southeast through rolling fields of ochers and rust. Pairs of blue cranes were sprinkled parsimoniously through the land, tall and graceful in their steel blue robes. We caught a couple or two performing their mating dance. Wearing the grand title of National Bird of South Africa, they showed reserve and would slowly walk away when we stopped for pictures. We’ve had a difficult past, they seemed to be saying, and the present needs nurturing. Leave us alone, we can do it. 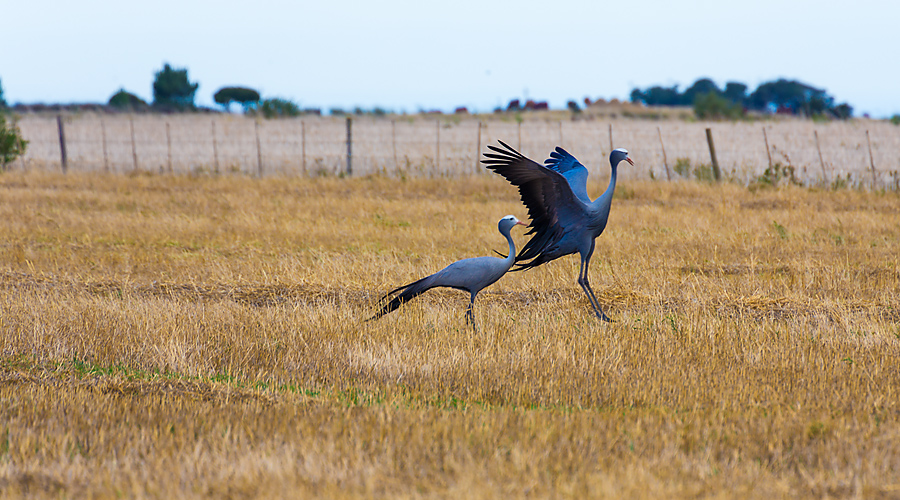 Crude and unappealing, Bredasdorp was crossed, bagged and left behind. With it, civilization took a backward leap. We aimed almost due south, picked up a dirt road, then another, wiggled our way past deserted cattle farms and a few low houses packed against what was their dusty lifeline to the rest of the world, and we were there. But there was nothing. We smiled. Just as we had hoped.

Our cottage sat squarely off the left side of the dirt road at the foot of a tiny outcrop. A closed gate in front of it bore an equivocal sign that said the entrance was further down. Puzzled, we continued a hundred meters and found a second gate, which we opened, crossed and latched neatly behind us. A pretty loop through the fynbos brought us back where we had just come from. This was the owner’s – long but humorous – way of showing us around the place. 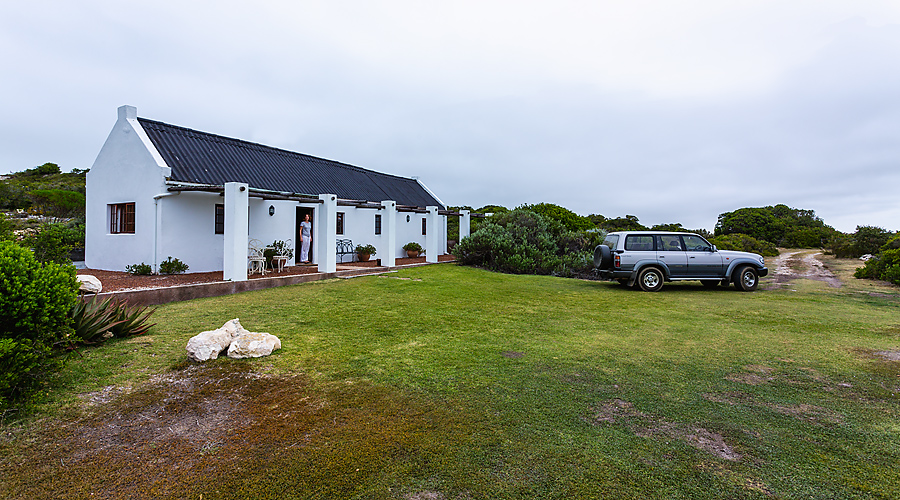 We took possession of our domain of four nights. A pretty white house in good old Cape Dutch style, green lawn in front and vegetation all around, it was cozy. The grass was a clean green but punctuated by a few old splatters of soil, and it one spot a fresh mound left no doubt in our minds: a mole was happily doing underground business on the premises.

The Landcruiser was unpacked and for the next four days, time slowed down to the rhythm of nature, solitude, tides and circadian cycles. We were almost beyond the reach of the wired world. The nearby reserve was explored but I will post further about that later. We also went on daily short drives, radiating from our base towards nearby poles of interest: Cape Agulhas to the west and south, Arniston to the east and north.

Agulhas, we had visited before. But as I have said, there is something viscerally gripping to standing at the very foot of the gigantic African continent. You are there, looking at much ocean, then turning around to face a lighthouse and low hills of fynbos and sand, and you struggle to fully accept the fact that above you – figuratively but also in latitude, on maps, compasses and most tour guides – lays the most incredibly diverse, deeply scarred and often mortally wounded, ever-struggling and forever handicapped, cradle of most things sentient, Africa.

At that moment, you feel so small, so meaningfully reduced to the condition of insignificant speck, that you almost shed a tear. I kid you not. 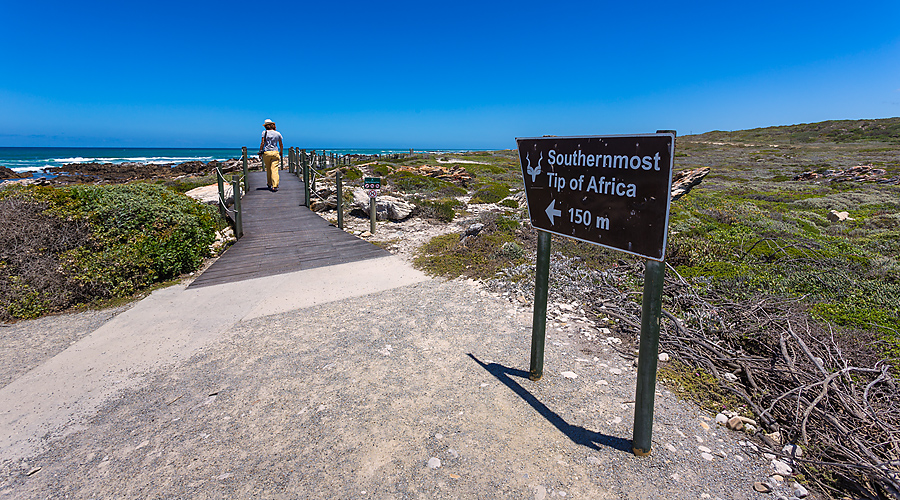 But we did the tourist thing, too, and walked to the sign. Watching people climb on it to take portraits of each other, the tear evaporated. Then we went back to the village and sought an ocean view of the lighthouse from a steep residential street. A container ship was rounding the cape some distance offshore. I wondered if her crew even cared.

On the opposite side of De Mond, we visited Arniston where we investigated famous caves. Dug by the sea, they open into the bottom of ocean-facing cliffs and are reached by first climbing up to a ridge and then back down to the water. Tides were playing against us and Marie decided to hang back, but I had to see for myself so I waded and crouched and crawled, ending up in a magnificent chamber where my classics all came rushing in – The Man in the Iron Mask, Cast Away and so many others. I looked for Wilson and I thought of a treasure, wondering where it would be hidden.

But the tide was coming in fast and would eventually flood my access tunnel, cutting off all exit. Waves were still low but at times thundered into the bright opening, reminding me that an outward escape would be cruelly unpleasant, so I retreated towards the narrow entrance passage at the very back of the room, stumbling on slippery stones as I ducked under a chiseled low ceiling, and met a much relieved Marie in the sunlight. 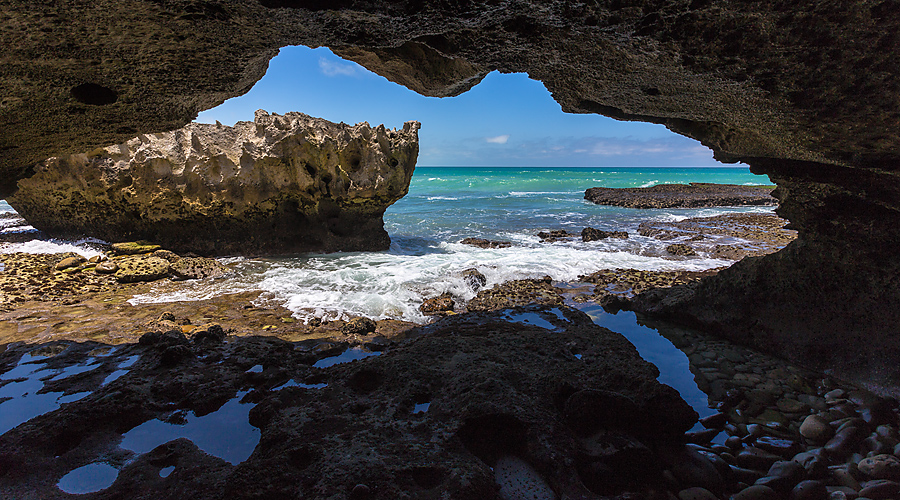 From inside the cave, the entrance is at my back

We moved into town to have lunch at the only hotel. The patio view unto the bay’s turquoise water was superb but their food was less than average. I came up with a dreadful tonsillitis that night and I will always blame Arniston for it. Not all parties agree. I think it was the cave or the hotel. Cursed. Days later in Cape Town when I finally went to see a doctor, she made me open wide, peered down my throat and said: “Oh wow!” She gave me antibiotic pills the size of bumble bees.

I will post about De Mond separately, as there are enough bird pictures there to fill a book.

For now I give you, south of south, the bottom of the second-largest and second-most populated continent, yet the poorest. Africa.