With the 2010 FIFA World Cup* coming to South Africa this summer, or rather this winter as we are in the Southern Hemisphere, crowds will no doubt descend on Cape Town like flocks of vultures circling a tourism prey. 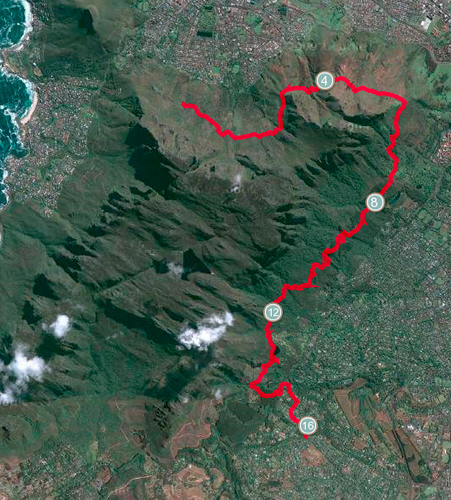 Some will be hooligans and care only about drinking and causing trouble in the name of their team. I wish them to fail and be arrested. Others, I hope, will arrive with healthier aspirations and a few might even be able to focus on something other than soccer. For the runners in this last category, here’s my trail running suggestion of the week.

Cape Town is, and always will be, the city that lives by the many rhythms of Table Mountain. It would be hard to ignore said mountain as it stands right in the middle of civilization, surrounded on all sides by mankind and its many follies. Yet the table remains incredibly unspoiled, protected and grandiose. Easy accessible, it still retains a latent level of danger which claims lives every year. This, my friends, is where I want to send you running.

I posted about a trail run last year that started at the Constantia Nek and climbed all the way to Maclear’s Beacon, and back. This time, I’ve tried to avoid major elevation gains so that the running would be more even. The one kink with this run is that it will require friendly assistance from someone who

can drop you off and pick you up later, as it isn’t a full loop, unless you can make it so. In my case, the final leg led straight home.

The starting point is no other than Table Mountain’s Lower Cableway Station, on the city side. You can wave at the tourists as they get ready to be cattle-carried up on a cable and you head north on the paved Tafelberg Road, warming up despite the hot weather, just to be sure.

Your run begins right there, with the cable car ascending slowly behind you, the mountain rising steeply to your right and the city sprawled down below on the left. The road will be paved for some 5 or 6 kilometers, even though cars can only reach half-way. Start slowly, the heat might be new to you, and you have 16 km to go on very mixed terrain. Ideally, wear sunscreen, bring a hat, water and energy.

Up on your right, you’ll notice a very steep and narrow gorge leading to the top of the table; it’s Platteklip Gorge, only “easy” walking access to the summit on this side of the mountain. Slightly behind your left shoulder is the outcropping of Lion’s Head. You get a perfect view of Cape Town and its harbour, and can follow the shoreline further north around Table Bay all the way to Blouberg.

Eventually, you pass a barrier and enter the restricted part of the road. No cars beyond this point, you are free. Keep running along the mountain side until

the road turns into a dust and rock path. Follow it down a little and you will get the option of climbing straight back up as you are about to turn the corner above Rhodes Memorial. Past this point, a map will do you immense good. I highly recommend The Maps’ waterproof and tear-resistant maps.

You now are running on hiking paths. They can be quite narrow and uneven, so watch your steps. You climbed quite high on the slope of Devil’s Peak and have to descend back to the tree line. Hiking paths then alternate with wider trails that are called jeep paths and allow theoretical access to emergency vehicles. You’ll be running in and out of the forest, crossing small creeks and climbing short but steep sections as you progress around the mountain and onto the southbound second half, towards the Kirstenbosch botanical garden.

You should cruise above Kirstenbosch, past the path to Skeleton Gorge that leads up to the top of the table, passed Nursery Ravine, and along the water reservoir. This leads you into the Cecilia Plantation at which point you dash down to the left, aiming for the road that you cross, heading back to the civilized world. As a matter of fact, the Cecilia parking lot could make a nice pick-up point. As for me, I pressed on down to find Bordeaux Ave. and Brommersvlei Rd. to Sun Valley Ave, and I was back home in 2 hours flat.

(The pictures are rather crappy, taken by mistake as jpegs and shot on the go not to waste too much time. But at least, running with the G10 is quite doable and fun.)

* This means soccer. If you had to look it up, you might have earned my complete admiration. Or lost it. 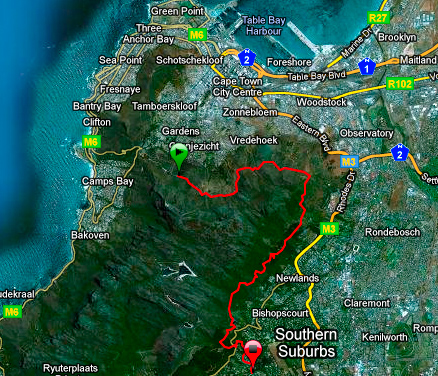