The Search for Yellow Rose

This is a re-post of a series of stories the first of which was written in 2008. I have revised it and completed it and added some pictures. It will now be part of the new “Little Cayman Chronicles”. This will be a nostalgic series. I unfortunately do not have relevant storm pictures worth illustrating this story, for obvious reasons. The images below were taken on various occasions, including the wake of 2001 hurricane Michelle which came close enough to take my porch away. They are old, most taken with a two-megapixel point-and-shoot. Sigh.

This was just another winter storm. It crept in from the east during the morning dives and by the time boats were going back out for their afternoon dives, the weather was already gloom and worsening by the minute. But prevailing winds blew from the southeast and made Little Cayman’s south shore, closest to the resorts, un-divable. Boats were forced to go around to the north in search of calmer and clearer conditions. 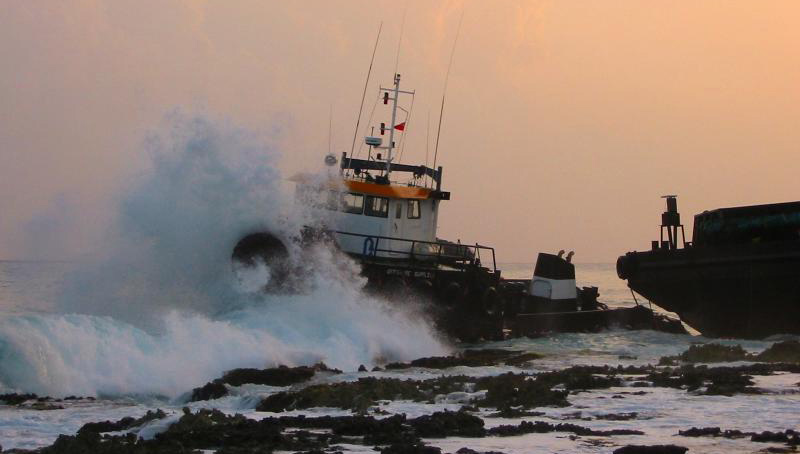 Pirates Point Resort ran a single dive boat. She was a custom-built forty-two-foot Newton and was called Yellow Rose III. Like ours, her dock was not located on the resort itself but rather near all the other docks, in the center of the sound. Divers were driven from the resort to the boat in a pick-up truck. Their dive schedule was offset from everybody else’s because of the radically different rhythm that prevailed at the resort, run by Gladys Howard, a loud southerner chef with a soft heart who had become a local landmark. That afternoon, Yellow Rose ended up going out a little later than usual. She must have passed some of the earlier returning dive boats on her way out to Bloody Bay.

By late afternoon, the storm was raging. Heavy rain was falling in thick curtains and limiting visibility to a few hundred feet in all directions. The wind was howling and building up ten foot seas. Light was failing early. All other dive operators had called it a day and boats were resting at their storm moorings inside the sound, while on land air compressors were roaring life back into empty tanks for the next day’s dives.

Then a call came in on the VHF, and the news spread almost instantly across the small island. Yellow Rose was missing, lost in a squall. They had left their dive site in limited visibility, heavy rain and heavier seas, and tried to rally the base by dead reckoning around the island, a little further offshore than usual to avoid running aground. But they had gone too far and missed the narrow tip completely when they came back in towards land. They had then navigated back out and back in, trying to gauge if they were too far south or too far north. They did not have a GPS on board. They had become completely lost.

Faces were grim on land. The night was falling fast and there were only a couple of dive boats that were sufficiently equipped and skippered skillfully enough to head out through the extremely hazardous breakers of the cut and into the mad darkness, on a search that involved hundreds of square miles of ocean. Ours sure was not. Banana Wind had a very low bow and did poorly in heavy seas, the South Cut turning into a deadly roller-coaster once the waves have reached a certain height. I was both relieved and deeply sorry that I would not be able to go back out. It would not have helped much, though. Yellow Rose would have to find her way back alone.

A storm brews on the horizon, shot from home
(Unrelated to the story)

Islanders who owned a handheld VHF radio—which was pretty much everyone—scattered across the island to try and establish the lost boat’s position according to the clarity and strength of their radio signal, since there was intermittent contact. Thunder and lighting were ominous and for a long time, we attempted to figure out where the Rose was by comparing the direction and timing of lightning with them over the radio. Nothing matched. They seemed to be quite far away. Their signal was getting weaker. The two crew members on board radioed that they were doing their best to stay calm and reassure their passengers, but they reported that all were wet and very cold.

The night had by then long fallen and a few people were dispatched to key locations on land with flare guns. I was among them and we tried to fire in sequence, hoping for Yellow Rose to spot one of the flares. They never did. Doubt was creeping into minds. The night still had long hours of fury to unleash and one way or another, the boat was going to drift far offshore and possibly run out of diesel. However, if weather cleared by morning, there was a chance we could send an aerial search party, as there were a couple of privately owned single-engine airplanes in the vicinity and the local airline might have helped with spotting from its scheduled flights.

Then suddenly, almost five hours after they had become lost, the crew aboard Yellow Rose broke a long radio silence and announced: “We see some lights, north of us! We are south of either the Brac or Little Cayman.”

We held our breaths. It turned out the missing boat was past Point of Sands, the easternmost tip of Little Cayman, just off the breaking reef. They slowly navigated west along the breakers, trying to remain at a safe distance but unwilling to let go of their line-of-sight to shore, until they found the cut and headed back in, after a run at full power to pick up speed and avoid having the breaking waves crash on their stern and make the boat broach.

It was a close call, island style.

That night, every skipper on the island made a mental note to always carry a GPS, even if only going from the beach to the boat on a dinghy. And everyone was reminded, once more, that the minute we stop respecting the ocean, or even maybe fearing it a little, it can bite nastily.

The event would fuel nighttime stories for months or even years to come. Once everyone had warmed up and the boats were back at their moorings, people gathered at a bar, glasses were raised and as alcohol flowed, the story began its journey. Crashing waves slowly inflated to monstrous proportions, darkness wore a Mordor-like cloak, and the cold froze people into Himalayan perdition. Such are stories. They are granted a life of their own by retrospective chills and replayed over and over again, gaining saturation, like repetitive layers of paint on a wall.

This one had a good ending. Not all island stories do.

Already reading sequentially?
Previous story: Welcome to the Rock
Next story: That Perspective we Gain and Lose